Well last night, I unveiled the featured artist for the second week of the E2TG 6th Anniversary - May Residency at The 5 Spot. It is 2015 Artist of the Year, Jon Latham who will be rocking the house with a full band set. If you haven't seen Jon and his band, get ready. It will be loud and it will be awesome! 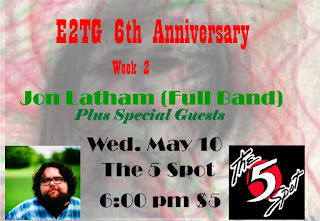 If you are in Atlanta tonight, Nashville's own Benchmarks will be playing at Vinyl with long time E2TG favorite Killing Kuddles.


It is Tuesday, and here at E2TG that means we dig into our "New Music" playlist and find out what is "Trending"


"A Face in the Mountain" by Lesley Kernochan

"Wherever I Go" by Lesley Kernochan

From the mailbox to the shuffle in short order, we begin today's shuffle with a twofer from Calm Sun - which is not due out until May 19.  Lesley Kernochan is a California singer-songwriter.  This is my introduction to her music, but from what I understand, she has covered a lot of musical ground.  These two songs (my first listen) are introspective and gorgeous.  Her backing band includes some veteran players whose resume includes working with Michael Jackson and Steely Dan among others.  My initial impression is that this reminds me of Gillian Welch - and I mean that as high praise. I expect I'll have more to say as more songs from this album come up in future shuffles.  Keep an ear out for Calm Sun.

We move on with Taj Mahal's take on the Son House penned blues standard. This is from Labor of Love which was released late last year in conjunction with the Music Maker Relief Foundation. These are recordings from a few years back that are finally seeing the light of day. Some of the songs on the album feature Taj Mahal working with some of the artists assisted by the foundation.


"What Do You Mean?" by Microwave Mountain

Shifting gears, we move along with another track from Shades Up by Micorwave Mountain.  This loud rock band was founded by Jamie Timm and recorded solo by him. They are now a band and they kill it live. Check them out if you get the chance - like maybe Thursday at The 5 Spot!


"Darlin' I am Fine" by Christopher Bell

Another cool track from Rust - Christopher Bell. He is a songwriter and cellist. Really dig his sound. Check out the video in the playlist which is his interpretation of an AC/DC classic. Inspired.


"Squish Spiders For You" by All Those Ships

Next up - a sweet song from the album Meteorology for Runners by this singer-songwriter from New Hampshire.


"For the Loss" by Joe Goodkin

And we close things out with another track from the self-titled album by this band who are either from Sacramento or Alaska or both or neither. By the way, there is a metal/hard rock band called Swain. This is not them - as far as I can tell. There is also another music blog called Ear to the Ground. This is not it - as far as I can tell.   Oh, and I dig this band a bunch - so check them out.