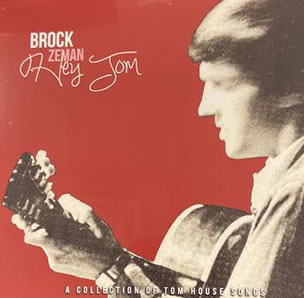 A collection of songs written by E2TG Favorite Tom House and performed by E2TG favorite Brock Zeman. Zeman has produced Tom House, so this is not far-fetched, but I am digging what Zeman is doing with Tom's songs. In one of  those weird E2TG coincidences, I noticed that Raphael Weinroth-Browne plays cello on the record. You may recall Weinroth-Browne from The Visit. We originally connected with in indirectly through Valued Customer, and I can honestly say I never expected such a direct line between Tom House and Ugggy and Pat Power, but then again, they are all wonderfully creative and weird. Frequent Zeman collaborator Blair Hogan is here. My first impression is that Zeman does Tom House's wonderful songs justice and gives them his own unique spin.

Nashville band led by Joseph Lekkas and featuring E2TG Favorite Benjamin Douglas. Sounds unlike almost anything else happening in Nashville. This track really sounds like a 80s goth/new wave song that you just can't place, but you know you love. My first impression is that I cannot wait for the February 7th EP of the same name.

Long-time E2TG favorite Strange Majik - aka David Pattillo (who we first met as part of the powerhouse The Dead-Exs), is back with a vengeance. This new single rocks hard and has a deep groove with some killer horns. This is from his forth-coming 20/20 album due in March. I've had a chance to preview the album, and the opening track rocks hard - while later tracks just go deeper into the groove. It is a sonicly diverse album with an underlying feel. At time it reminds me of World Party at their best, at other times, it harkens back to the initial Dead-Exs tracks I first heard - almost eight years ago. My first impression: it is great when early E2TG favorites keep doing great things.

Ubiquity Machine - Where We Want to Be (LP) - release date ??

It doesn't get much more "early E2TG" than Ubiquity Machine. The D.C. area band features Howard Rabach and Dan Marsh. Rabach was most likely the first person I didn't know who read E2TG (and I am talking about in the earliest and most embarassingly awkward days. I remember my initial first impression of Ubiquity Machine was that it sounded like a weird and wonderful mix of all the music I had ever loved growing up. I finally got to meet Howard Rabach in 2014 when he came to Nashville with The Grey A (he plays bass in that band).  This is a compilation of sorts -a limited-edition vinyl release of many of Ubiquity Machine's great songs. It includes "A Beautiful Girl" which appeared on the first and so-far only E2TG compilation. My first impression is that I am glad to own this fine collection of music, and I know the effort that went into it, and I grateful for the first of many fine friendships I have forged by this silly music blog I write.

The latest release from New Haven's Them Airs. The band features Cade Williams who we first met via his experimental project Smokey the Firebear and Evan Nork (of the Foresters and all those other side-projects). Hayden Nork sometimes joins in. Digging the progression of this band since their last release. They seem to be really finding their voice as a band. The album is delightfully noisy at time. In other places, I hear the angular sound of early Talking Heads. My first impression is that it is fun following young and talented musicians and they explore possibilities and discover themselves through music. In my initial listen, I hear how some of the most experimental and challenging Smokey the Firebear pieces inform this new music, and I also hear other influences.

Speaking of Hayden Nork. Merrill Beach is current solo project. He is and has been in a ton of bands. Batkhi Dahn is his band that features his brother Evan and their Foresters bandmate Luke Slomba (of Sonic Reducers). Digging on the moodiness of "Green" with some backwards vocals, a strumming guitar, and dream-like quality. "Marimba" starts with a groovy beat that sounds like it could be the intro to a really cool hip-hop song (I wonder if his brother Liam's work has inspired him), but the beat just continues. It is hypnotic. Their is some ambient noise. I can't tell if the beat varies or if it is my mind playing tricks on me. About two minutes in, and the sound does begin to vary. I do hear the title instrument. My first impression is that Hayden is doing some wild experimentation - musically - I won't speculate otherwise, And, having watched him from his days as a Green Day obsessed pre-teen to this has been a pleasure. I can't wait to see where he goes from here.