Time keeps moving along. This is the last week in March!  It's time for our Wild Wednesday Morning Shuffle. 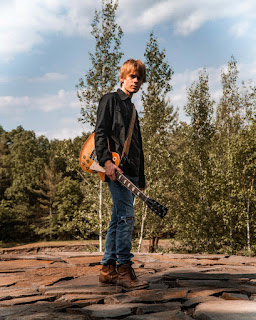 Sometimes, songs from our new music playlist show up on Wild Wednesday, and that is the way it should be.  We start things off with another track from Flesh and Bone - the latest album by the veteran musician - based in Nashville - Steve Conn. My main connection to Steve Conn has been through his long-running association with the great Sonny Landreth.  I am grateful to have the chance to hear and write about this album. I am loving it very much.


"Valley of the Bones" by Jane Kramer

Next up, we have another from the "new music playlist".  This is the title track from the recently released 3rd album by North Carolina based singer-songwriter Jane Kramer.  This is lovely music - which features a great cast of backing musicians that includes a two-time Grammy winner, a member of Steep Canyon Rangers, and a member of the Asheville Symphony Orchestra.


"Not With My Life" by Luke Powers

Next up, we have a track from Hwy 100 by Nashville-based singer-songwriter/poet Luke Powers. I picked up this CD when Luke joined in the Words Without Music event I helped to organize. I was not familiar with his music or poetry before that night. His poetry impressed me, and I can report being equally impressed with his music. I could not find a video for this exact song, but I found another song worth checking out in the video playlist.


"The Light" by Some Kind of Illness

One of the great things about Wild Wednesday is getting a chance to revisit music we featured years ago. This is a track from the self-titled album by the UK band formed by two brothers.  It was a good reminder of how much I dug this album - from 2015 - and it makes me want to catch up with their more recent output.


"Road Crew" by Mike and The Moonpies

Of late, I have mostly gotten new music through submissions, but every once in a while some music comes my way through other sources - so it was with Steak Night at the Prairie Rose by Austin based country/Americana band Mike and the Moonpies.  I have heard a lot about this band, but this was my first real chance to hear them. Cool stuff.

It's no secret that Rayvon Pettis is one of my favorite songwriters around. He was the 2017 E2TG Artist of the Year. This is the moving title track from his album released late in 2017.  He recently released a split EP/album with another favorite writer in town - Ryan Sobb. It is worth checking out.  This song tells an emotionally powerful story of Pettis' first days in Nashville. It is a reminder to open your eyes and your heart to all the people that life brings across your path.


"No Meaning" by Liya

Next up, we have a first listen to the debut EP by Israeli dark wave/electronic artst Liya. The EP is called Listen, and it was released at the tail end of 2018.  The music is inspired  by a variety of music styles including some elements of 80s New Wave music. I dig this.

We have been featuring Adam Carroll's forthcoming new album I Walked In Them Shoes.  For today's shuffle, we go back nearly two decades to his debut album South of Town.  Somehow, Adam Carroll came out of the gate a great songwriter, and he has not let up since. I was relatively late to the Adam Carroll game (I had heard a couple of songs), but I am all in now.

Sometimes my overflowing inbox gets the better of me. I was contacted by 20 year old New York based singer-songwriter Shane Guerette last year, and I guess I am just now getting around to featuring some music from his self-titled EP.  Better late than never, I suppose, and I love this music very much - as I did when I first heard it.


"Pajama Party in a Haunted Hive" by Beat Happening

We close things out with a great track that I am not entirely sure when or how I added to my playlist. Beat Happening are on indie pop band that formed in Olympia, Washington in 1982.  This is a track from the band's third album Black Candy which was released in 1989.  The band never officially broke up, but they haven't performed in public together since the early 90s.