ICYMI - Earlier today we premiered a new video from Nashville-based duo Anana Kaye for their song, "Blueberry Fireworks".  It is a gorgeous short film - if you haven't seen it yet, you can check it out HERE. 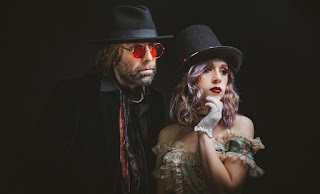 Meanwhile, it is the end of another work week- finally - and we have our final shuffle of the year.


We start things off with another track from UK artist, Skylephant and his release Songs from the Fragile Collective.

Next up, we have our first listen to Scared Fearless by Connecticut singer-songwriter Daphne Lee Martin and her band Raise the Rent.  I recently saw Daphne here in Nashville at Bowery Vault. My first introduction to her music was on a benefit album Hurrican Sandy - several bands/artists from the Northeast that I knew about were on that album.  Next, I was reminded of her music by Jack Nork - the father of 3/4 of The Foresters.  This is a wonderful album, and I look forward to writing more about it.


"Fading Out of Time" by SPC ECO

Next, we have the first of two track from Fifteen - the current album by London-based alternative band SPC ECO. Great sounds on this one.

Next up, we have the one and only Watermelon Slim covering Muddy Waters with an assist from "Steady Rollin'" Bob Margolin - whose own music we have features and who backed Muddy Waters himself for several years.

The shuffle has grown attached to BlackieBlueBird - the Danish duo and their release Ghost River - and so have I. It is a gorgeous work and one I glad to have been introduced to.

Next - our second track of the day from Fifteen.  SPC ECO - which is vocalist and lyricist Rose Berlin and instrumentalist and producer Dean Garcia - along with a huge cast of friends and collaborators.

Has Steve Poltz finally been in Nashville long enough that he has written a song about a pickup? Maybe - but the song is about all of the various meanings of that word, and it is a great song. His album, Shine On, which was produced by Will Kimbrough, is already sitting pretty on my early list of favorite albums of 2019.


"The Lady Killa" by Auld

The shuffle comes to a strong conclusion with this track from London based genre fluid band, Auld and their album Mainstream Music. I really liked this song quite a bit. I was listening as I arrived at my office to start my day. A great way to close things out for the day and the week!