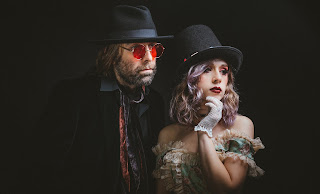 Today, I am thrilled to have the opportunity to premiere the brand new video from one of the hottest duos in Nashville right now. Anana Kaye and Irakli Gabriel are Anana Kaye (the band). The pair are originally from Georgia (the country not the state just to the south of Tennessee).


Over the last several months, the two have taken Nashville's music community by storm. They have that  rare combination of talent and personality.

The video is a work of art and it stars the amazingly talented Rosemary Fossee.  Now, you can check it out here and only here at E2TG!

From the press release for "Blueberry Fireworks":


This short film depicts the human experiences of hope, joy, frustration, loneliness and desperation whilst still true to a satirical root. Portrayed by actress and close friend of the band, Rosemary Fossee, the lead character takes us on a journey through her reality set somewhere in the 1950’s, while the location is quite obviously set in the modern day. Rosemary cycles around town wearing  950’s attire, with a mannequin draped behind her posing as her “boyfriend”, who she takes on all kinds of outings throughout the video.

Through vibrant visuals Rosemary shares her moments of depression, and mental illness that we can all relate to and have accepted as the norm. Filmed by Anana and Irakli (Anana Kaye) through their video production company Duende Vision based out of Nashville. Cinematically, the video alludes to Surrealism in film and Theatre of the Absurd, classics like Luis Buñuel and Alejandro Jodorowsky. The band make a brief cameo in the video at the end. “

Blueberry Fireworks" depicts the humor and absurdity that has become our reality.