I'm not going to lie, it's been a rough week.  I am so glad it is Friday.  I've had a lot to talk about, but I haven't had the time or energy to do it. So, expect me to unload at some point. 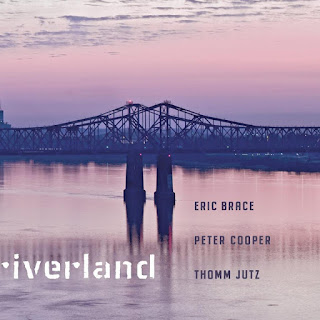 "To Be a Steamboat Man" by Eric Brace, Peter Cooper, and Thomm Jutz

When you see that there is new music from either Peter Cooper, Eric Brace, or Thomm Jutz, you don't hesitate to check it out. When it is something from the three of them together, you run and don't walk. Riverland is a sort of concept album - with rivers running through the album - well, like a river.  Steamboats are an enduring symbol of the river as a connector and a romantic lifestyle. This is a stunning song, from one of the best albums of 2019.

"Trouble on the Jackson Farm" by 6 String Drag

Next up, we have a truly wonderful track from the forthcoming vinyl reissue of The Jag Sessions by 6 String Drag.  Only 500 copies are being released on Record Store Day with is just a couple of weeks away. Look for it and a record store near you.

"In the Field" by Renee Wahl and the Sworn Secrets

Next up, we have another track from the new album by E2TG favorite Renee Wahl and the Sworn Secrets. I got to attend the release show for Cut to the Bone a couple of weeks back. Renee is one of Nashville's best, and her backing band (which can vary from show to show) is always made up of some of the cream of the crop of Nashville musicians.


"Milly By Summer" by Tito Montana

Next up, we have the first of two tracks from Why Not Me?, the forthcoming (April 19) new album from New York MC and entrepreneur  Tito Montana (born Rayhiem Drayton).  His words and sound reflect his life to date which has been filled with hardships and triumphs.  Always happy to have some real deal hip hop in the shuffle.


"Look Up" by Beauty in Chaos (feat. Tish Ciravolo)

Next up, we return to Finding Beauty in Chaos - the debut album by Beauty in Chaos - which is an assemblage curated by L.A. guitarist Michael Ciravolo. The album boasts an incredible cast of members and former members that represent a who's who of modern music (crossing decades and genres).  A newly released single features Zakk Wylde, Ice-T, and members of The Offspring and King's X. We will be getting to that one soon. This track features Tish Ciravolo who is a bassist and the founder and president  of Daisy Rock Guitars (a girl-guitar company formed in 2000).

Chug it Down and Go is a wonderful album, and it is also one of the funnest releases in a while. Daniel Seymour is a busy bass player who has backed many of Nashville's finest over the last couple of decades.  Mark Robinson (in addition to being the other half of my radio other half) is bandleader, songwriter, guitarist, producer, engineer, and educator. The two (both native Hoosiers) have been working together for years and years (in various configurations). This album - done for the joy of it - was a long time coming, and it was worth the wait. I got the subtitle of today's shuffle from this song, and it occurred to me that checking into a motel with several reusable grocery store bags full of stuff would the modern equivalent of the cardboard suitcase. Not that I know anyone who has done that.


"Nobody Knows" by Tito Montana

We close with the second track from Why Not Me? A little hip hop to close out a great month and first quarter of music.