Any show that starts with a former E2TG Artist of the Year followed by the reigning E2TG Band of the Year - sure has something going for it.  I ended up at The 5 Spot (I know! It's shocking!) for the late show last night. Darrin Bradbury kicked things off. It was one of his best solo sets (that I have seen). Many of his newest songs are emotionally powerful - continuing to walk that line of humor and brutal honestly (brutal but delivered with heart and charm).  The Big Dumb were up next, and I continue to be blown away by this band. In my view they somehow manage to be a tight unit while still be incredibly loose.  They are all multi-talented artists, and something magical happens when they come together.  Chicago band Half Gringa were next. This was my first time seeing them, and I was very impressed.  I really dug their set.  Ryan Sobb closed the night with a full-band set. It was my first time seeing Sobb with a band, and it was great hearing his wonderful songs - fleshed out. It was a high energy rocking set of music.

Whew!  We have to get going!  It's Thursday - time to head back to the Trending playlist. Interestingly, this same playlist on Tuesday brought up a mix that was heavily weighted toward experimental and/or noisy music. Today, we get more roots, singer-songwriter type songs. It's all good. Let's go! 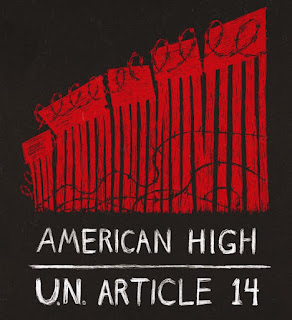 "Another Way" by Dean James and the Black Dogs

We start things off with a wonderful song from the album TRUTH by UK band Dean James and the Black Dogs.


Next up, we have a lovely number from Valley of the Bones by Asheville North Carolina singer-songwriter Jane Kramer.

Blues harmonica master, Tim Gartland is up next from his album Satisfied. Tim Gartland will be playing at the Frist museum tomorrow.


"Life's Been Raining All Day" by BlackieBlueBird


"Many Happy Hangovers to You" by Jason Ringenberg

Next up, a rollicking blues instrumental from the one and only Mississippi Fred McDowell. From the recently issued Best of compilation.

Next up, we have another track from U.N. Article 14 by California rock band, American High.

Polly Panic plays rock cello. She is also a member of the heavy cello rock band Rasputina.  Losing Form is the album from Polly Panic that we are currently featuring.


"Elizabeth and Spring" by Bruce Smith

We close things out with Austin based singer-songwriter Bruce Smith with a wonderful song from Till The Wheels Fall Off. This was a great way to wrap up the shuffle!