One of my favorite albums of last year was Gabrielle Louise's If the Static Clears... Nashville - you have two opportunities tonight to see her perform.  She will be down at The Basement for New Faces Night, and then over at The 5 Spot for $2 Tuesday.  I highly recommend you check her out.


Plans are coming together for tomorrow night's Week 2 of the E2TG Residency.  As I posted yesterday, Jon Latham is going to be unable to perform due to some serious health issues. We will miss him and are sending all good thoughts his way.  We want to make sure this is a show that would meet with his approval.  I think we have that covered.  A fellow E2TG Artist of the Year - Darrin Bradbury will be filling in - and we have some more guests.  Kristen Englenz and Nick Nace - who Jon selected to open will play first, and then we will continue with more great music. 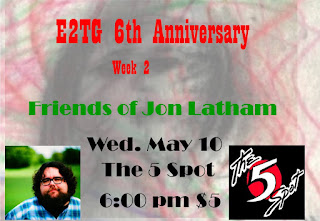 Okay - so it is Tuesday, and that means Trending Tuesday.  Well, about three songs into the shuffle - I realized that some of the songs were not actually from my "New Music" playlist (turns out I was shuffling from all Songs somehow).  I made the adjustment, but we have a couple of wildcard selections in the shuffle.  Not complaining.. just explaining....


"The Water's Fine" by Carol and Dale

I didn't immediately catch on because this song is a part of the New Music playlist.  This may be my favorite track from Carol and Dale's current album, Be Here Now.  A really great message in a great song.


"Hangin' Out" by Betty Davis

Betty Davis - not Bette Davis - is a soul singer. Most active in the 60s and 70s. This track is from a compilation of songs that had been in the Columbia Records vaults - they were produced by Miles Davis to whom Betty Davis was married for about a year. She introduced Miles to Jimi Hendrix and Sly Stone and is credited with shaping the direction of his music during that time.   This compilation - The Columbia Years - 1968-1969 was released last year.


(I began to suspect something was amiss in my "Trending Shuffle" at this point, but I pressed on until....)

Abdou El Omari was a Moroccan musician who experimented with electronic, world beat, and other styles. This album was released in 1976.  Very cool stuff.

(But, I knew it was not from my "New Music" list - so, I called an audible and rebooted  the shuffle)


"Song for Elijah" by Lesley Kernochan

We are about ten days out from the official released of A Calm Sun, by California songwriter/singer Lesley Kernochan.  The record features an impressive cast of musicians and great songs.


"James' Song" by The Rosellys

Coincidentally, James' Song follows Song for Elijah in the shuffle. This is another one from The Granary Sessions by this UK Band.


"Early in the Moanin'" by The Soul of John Black

Next up, the title track from the current album by The Soul of John Black.  I recently discovered, by cleverly not completely reading the info sheet I was sent, that the artist who performs under the name The Soul of John Black is a long-time member of Fishbone - one of my favorite bands and recently rejoined the band. I also realized that I likely saw him when I saw Fishbone play at the Earth Day show in Foxboro Stadium back in 1992 (that cold show that also featured Indigo Girls, Violent Femmes, Robyn Hitchcock, Midnight Oil etc.)

Kristen recently released Travel Songs. This is a track from her previous release Rend and Render.

Yep, we close out with another Track from Ugggy. My shuffle can't get enough of his sounds, and neither can I. This is from the first of his three recent releases (The Divided Tape). There are only three Ugggy videos on YouTube (that I can find) so I have started posting Valued Customer videos instead). E2TG band of the year - a long-deserved distinction - I have been digging their unique and wonderful tracks from years. Ugggy is on a creative roll, and he is one of those rare artists that I just want everyone to hear. Do yourself a favor and check out what he is putting down.