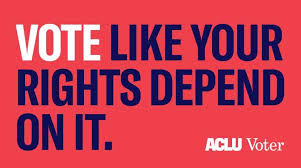 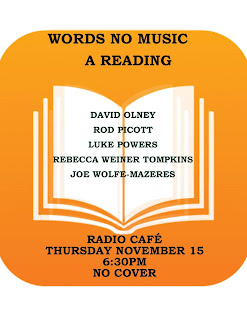 All of this happened a long time ago when the world was a very different place. Of course, none of us knew that at the time. (From The Drift - A Novel by Joe Wolfe-Mazeres) Available at Amazon.com (Kindle edition also available)
If you have read The Drift, please consider writing a review on Amazon. If you haven't read it, you can get your own copy through Amazon or if you are in Nashville, you can get them from me.

I am continuing to work on my Spotify playlists for E2TG.  So far, I have completed seven - January - July2018.  These are meant to be a cross-section of music I featured during those months - not necessarily music released in those months.   If you are interested, you can check out the playlists (links below)  and follow my personal profile to find out when new playlists are created.


Well, it is Election Day 2018.  I hope you checked out our Election Special post (link up top of this post).

I'm definitely going to need music and lots of it to get me through the anxiety of the day...

Let's start with a shuffle filled with tons of first listens (including some new releases from some E2TG faves).  Plus some returning favorites.


"Stranger in a Strange Land" by Mark Bryson

We start off with a first listen from Riot on Sunset by California singer-songwriter Mark Bryson.  Bryson describes himself as a New Age Space Cowboy Surf Poet.  The album is a culmination of a music career that began in 1965. The album itself was 4 and half years in the making, and the title track is a homage to the "City of Angels"

Manchester hip-hop group, The Mouse Outfit jump back into the shuffle with another track from their album Jagged Tooth Crook.  Like much of the album, The Mouse Outfit collaborate with other Manchester artists on this track. IAMDDB is an urban jazz artist and Kinkai is a hip-hop/soul/experimental artist. A wonderful track from this album, I have been digging on for a while now.

Next up, we have our second listen (and the 2nd track of his new two-sided single) from British artist, Paul Littlewood. We previously featured his track, "Television", and today, we have "Today".


"Some Kind of Heaven" by Dylan Rodrigue

Next up, we have a first listen to the forthcoming new album by California indie rock/singer-songwriter Dylan Rodrigue. Rodrigue is 26 years old, and his debut studio album, Cat's Game is due out January 26 via Palomino Records.  This was my first listen, and I am digging this album so far.  Expect to read and hear more - soon.

Next, we have a first listen to a new album featuring E2TG favorite Mark Robinson - joined by bass player extraordinaire Daniel Seymour.  Robinson and Seymour have been working together for years, and on a lark decided to start working on this new project. The result is Chug it Down and Go - which will be officially out this week - the CD Release Show will be Saturday at 6:00pm at The 5 Spot. This is a departure for Robinson - whose albums have been rockers in a blues vein. This album celebrates various styles of old-time music.  Out first listen, fulfills East Nashville tradition to honor the frequent request/demand of the late Skip Litz to "Play a fucking train song!"

Batkhi Dahn are back with their first new music since Oil Change which was released in April 2016.  The new album Hogwash was dropped on Halloween. Batkhi Dahn, I will remind you, is a side-project of The Foresters and part of the Dord Music Group family. It is primarily the creative outlet of Hayden Nork - joined here by his Foresters' bandmates Evan Nork and Luke Slomba. Great to hear new music from Batkhi Dahn out of the creative juggernaut that is Dord Music Group and the Nork family.


"Take Me Home" by UniversalDice

UniversalDice return to the shuffle with another track from their Birth, Love, Hate, Death album/rock opera. Led by Gerry Dantone, UniversalDice revisits the classic rock music of past decades - but they add their unique and modern touch to the music.

Super excited to present our final song of this shuffle- another first listen. Blood in My Eyes for You, is not exactly new, but it's new to me - the album came out in 2015. Deivert is an American ex-pat living in Sweden.  He is also one of the few blues mandolinists who makes albums of that music. He has a long and interesting musical background - which I hope to tell you about as we feature more songs from this album, but the first thing that caught my eye was that Deivert played on the streets of San Francisco as part of a trio with Peter Case - one of my all-time favorites.