Well, we've reached the end of another week of shuffles - here at E2TG.

Reminder: Monday is a holiday here in the States, and I am taking Tuesday and Wednesday off from work - so no new shuffles until Thursday - May 30! Enjoy yourselves everyone! 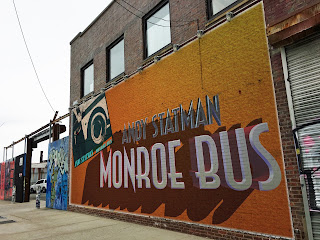 One of my takeaways from this year's Magnolia Roads American Roots Hoedown IV was the music of Las Vegas based singer-songwriter Bryan Haraway and his self-titled debut album.  Here is a cool song from that album to start things off.

Next up, we have another track from Brooklyn based Andy Statman from his tribute to Bill Monroe - called Monroe Bus.  Some great instrumental bluegrass sounds for our Friday.


"Willing Victim" by Daphne Lee Martin and Raise the Rent

Next up, we have another track from Scared Fearless by Connecticut based Daphne Lee Martin.  Check out the live performance of this song in the video playlist below. It features Martin along with violinist Kieran Ledwidge who accompanied her on her recent tour - which I saw at Bowery Vault a little while back.


"Walked in Them Shoes" by Adam Carroll

The title track from Adam Carroll's latest - solidifies my opinion that he is one of greatest living song writers. I am not one to stand up on anyone's coffee table, but if I were...

More good stuff from Shane Dwight and his album No One Loves Me Better.  At its best, blues rock music makes you move, and if you listen to this song while sitting still - you probably need to check your pulse.


"I Will Follow You" by Beauty in Chaos (feat. Evi Vine)

Next up, we have another track from Finding Beauty in Chaos. The all-star turn of the project that features Michael Ciravolo (Human Drama, Gene Loves Jezebel). This rather epic track features London based artist Evi Vine.


"The Game" by Chad Richard


"Minimize the Damage" by Dylan Rodrigue