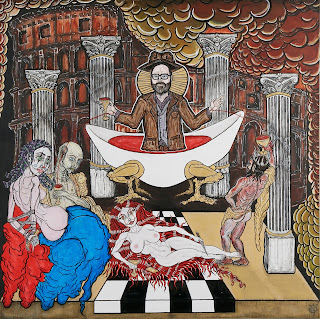 Today, I am thrilled to premiere a new video from Nashville singer-songwriter Afton Wolfe.  It is from his recent release Petronius' Last Meal. I first became familiar with Wolfe's music through his long-standing association with the Get Behind the Mule Tom Waits Tribute and Benefit for Second Harvest Food Bank.

I do hear some Tom Waits' influence on this release, but I also hear Afton Wolfe's distinct voice and signature. He is backed here by an excellent group of Nashville musicians.

Read more about the video watch it below!

Interrogations is the second video from Afton Wolfe's new release, Petronius' Last Meal. It's an ensemble song about three different characters and their disparate relationships with their beds. The first verse is a rich man, untroubled by the ways that his wealth is created and just enjoying the beginning of a new day despite the sacrifices others make to provide such luxury. The second verse sees us in a hospital room, watching an elderly woman say exhausting and sad goodbye after goodbye to her family. And the third verse visits an insomniac woman fighting through each day trying to separate the real from the hallucinatory regrets. We all make our own beds.

The video was created by the fantastic Czech artist Anastasia Miasnikova and brings to mind Michele Gondry and Stephen R. Johnson, with its surrealist imagery and vibrant motions.