*Note:  The video playlist at the bottom of the post attempts to closely approximate the shuffle I listened to on my way to work this morning.  When a video for a song was not available, I substituted another song by the same artist. When I could not find any videos by an artist, I included a related video or did not include a video for that track. This blog may reference unreleased tracks, however, no unreleased music is even included.


Made it back to Dee's last night for Madison Guild Monday for the first time in a while. Hosted by Tom Schreck.  Schreck opened with a full band set which he calls Tom Schreck Escapes.  As always great to see Tom play. His cover of "I Will Survive" was especially tasty.  Tommy Womack was next with a surprise solo set.  He will be back at Dee's Friday with a full band. He has a new single which is extremely timely.  Next up, a shared set from two of my long time favorites Kiley Connell and Drew Kohl. They were followed by the always impressive Connor Rand who had Nicole Boggs join him for a few songs. Excellent stuff. By that time, I was exhausted and I had to bow out before Nicole Boggs and the Reel played. Hate that.

I have a busy week of great live music ahead and lots to do otherwise. Plus it is way to hot. But, anyway - Music!  Today we dive back into the Trending playlist and we have some cool tunes for a hot day. 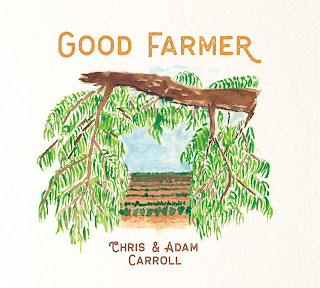 "City By The Sea" by Chris and Adam Carroll

Good Farmer - the new album by Chris and Adam Carroll is out in the world now. So, you know what to do!  If you weren't part of the successful crowdfunding - hit your favorite music source and get this album.  I only just got into Adam Carroll's music a few years ago, and I have been pretty obsessed with it ever since. Adding the wonderful Chris Carroll to the mix is pure magic. They are out on the road. If they come to your city, go see them. I know I will if they come.

I was formed that this new Big Evil album is not really an album - it was more of a recorded rehearsal. Live and raw and direct. It's hard to imagine improving on what this is.  Any way, in case you missed my earlier post or just forgot, Big Evil is a new band featuring Ben de la Cour, Chris Watts, Joseph Lekkas, and Pete Pulkrabek. They will be at The 5 Spot next Wednesday with Slump Test which features Ben Douglas and Ryan Dishen.

Next up, we have a track from Black Light White Dark  by London based Evi Vine. The album features an impressive line-up of guest featuring members of The Cure, Shriekback, and more).


"Drifting Away (Synthetic Capricorn Mix)" by Beauty in Chaos

Next up, we have another track from Beauty in Chaos - the assemblage  formed by Michael Ciravole (Human Drama). This track has an insane line-up: namely Robin Zander of Cheap Trick and Michael Anthony of Van Halen.  This remix - from the Beauty Re-Envisioned album is by Paul Wiley of Marilyn Manson and Steven Alexander Ryan of Black Queen.

Next, we have another excellent song from King of the Crows by West Virginia singer-songwriter Mark Cline Bates.  I am digging this album.

Next up, we have another track from the self-titled debut by Austin based Eye Said So - which is a two man band described as Schizo pop.


"Up on Cripple Creek" by Mrs. Henry

Next up, we have another song from that Last Waltz tribute by Mrs. Henry.  This is a Robbie Robertson penned song by mentions the town where my mom and dad first met.

Next up, we have a first listen to the forthcoming album The Unmaster by UK artist Dizraeli. Dizraeli is a rapper, producer, social activist, and spoken work artist.  He was a winner of the BBC Poetry Slam Championship.  The album is autobiographical, and I have been digging what I have been hearing so far.  More to come for sure.

Next, we have another track from Monroe Bus by the talented musician Andy Statman. The album is a tribute to the great Bill Monroe as well as a showcase for Andy Statman's amazing work.


"Head Above Water" by Creature and the Woods

Next, we have a track from the J Tree EP by San Diego based Creature and the Woods. The record was recorded in Joshua Tree and it is a beautiful and powerful work.

Suthernahia is due out Friday.  I have been digging this album, and I really loved this song. Check it out!