Friday night, I took in some live local music, and once again, had my faith in this town bolstered.

First was my regular Tim Carroll Rock n Roll Happy Hour. Although it may seem obligatory or routine, it is worth reflecting on what Tim Carroll and The 5 Spot offer each week. 2 1/2 hours of original rock and roll music with no cover in a wonderfully welcoming setting.

Carroll is a prolific songwriter who is constantly adding new songs to his already impressive line-up, meaning that no two shows is alike.

Next, I headed over to the Mercy Lounge for Blackfoot Gypsies, Lady Couch, and The Hollow Roots. That night, I reflected on the fact that it had been approximately 32-33 years since I first saw live music in that building (The Cannery complex). Back then, I often saw local or regional bands like Walk the West the West, Questionnaires, or Guadalcanal Diary play to enthusiastic audiences.

Some highlights worth noting:  I was not familiar with The Hollow Roots, but they had a great sound and a great energy. I would love to see them again.

Lady Couch (as they do) absolutely tore it up.  They are one of my favorite local bands and it was great to see a significant number of people experiencing their music for the first time (and in many cases falling in love with it).   The Band comes immediately to mind when seeing them.  So many talented people on one stage, pulling off this massive, seamless sound. Maybe this was a paired down Lady Couch? with just ten-eleven people on stage.

Blackfoot Gypsies have definitely paid their local dues, and it was great to see them headlining at a larger venue to a large and enthusiastic crowd.  The band is so tight and so fearless, even an equipment malfunction is handled with grace and bass/drum groove that kept everyone moving. It was a truly Nashville night of music, and I, for one, was impressed.

Speaking of Nashville, it is Monday and time dive night into the Music City Monday shuffle. 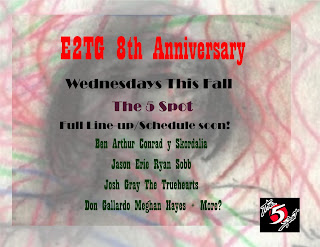 "Loving Her Was Easier" by Daryl Dasher

It doesn't get more Nashville than Daryl Dasher covering a Kris Kristofferson song from his 2009 album Long Road Now. Dasher is a wonderful songwriter in his own right, and a great singer. More Kris coming up...

Kieren Kane, Kevin Welch, Fats Kaplin along with Lucas Kane. From their 2007 self-titled album with a lovely instrumental. An amazing amount of talent in one spot.

One would be remiss in writing about Nashville's musical past and present and failing to mention "Everlasting Love". The song was first and most famously recorded by Robert Knight who had a hit with it. It has since been covered literally dozens of time. It is a highly recognizable song. Buzz Cason and Mac Gayden are Nashville songwriting legends.  This is an arrangement of the song for Orchestra and voice - that includes the songs two writers.

Speaking legendary Nashville songwriters.... David Olney has been a part of Nashville music since the days when Kristofferson was recording those sessions at RCA Studios.  In the 1980s, he performed and recorded with the rock band The X-Rays.  In more recent years, he has been making great album with memorable songs that all have that unique David Olney sound. This is from his most recent release, This Side or The Other.

Nashville continues to play host to variety of bands that don't have much to do with country music. One of the best is Sad Baxter - who we have here from their 2016 full-length album Weirdy.

Another great contemporary Nashville rock band, Idle Bloom are up next with a track from their 2017 album Little Deaths.

E2TG joins the music community everyone in wishing John Prine a speedy recovering from his recent medical issues. John Prine's importance to the music of Nashville (and beyond) cannot be overstated. This is a track from his most recent album The Tree of Forgiveness.


Heard the Lie" by Gina Sicilia

Next up, we have the title track from the latest album by Gina Sicilia - a wonderful songwriter and vocalist who has been making consistently great albums for years.  Rumor is she is hard at work on the follow-up to this album. Rumor also has it that she will be performing Saturday at The 5 Spot opening for Ted Drozdowski's Coyote Motel.