Another day of being short on time!  Let's get to it!  It's Wild Wednesday! 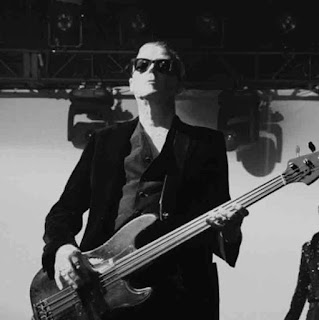 "The Ballad of Cain" by David J

First up, we have a track from Crocodile Tears and the Velvet Cosh - the 1985 solo album by David J (Love and Rockets, Bauhaus) which was recently reissued.   David J has been touring with his Bauhaus bandmate Peter Murphy.  You may recall that in recent months, we have featured music by Poptone which features Kevin Haskins and Daniel Ash also from Bauhaus and Love and Rockets.

Next up, we have a track from the 2016 album Taser Revelations by Scottish singer, songwriter, filmmaker, and label founder Adam Stafford.


"If You're Not My Lover" by Dylan Rodrique

Next, another track from Cat's Game by California singer-songwriter Dylan Rodrique.

Delta Deep is a band we featured back in 2015.  They play blues soaked, rock and soul music. Powerhouse vocalist Debbi Blackwell-Cook back by a band whose credits include Def Leppard, Stone Temple Pilots, India.Arie, TLC, Joe Sample, Michael Buble and more.  It is an interest mix of hard rock, neo-soul, and deep Delta blues.


"Paranoid" by Brandi and the Alexanders

Next up, we have another track from How Do You Like It? by New York based RnB/ Soul/ Rock band Brandi and the Alexanders.  This is an album we featured heavily last year.

The Queen of Rockabilly Wanda Jackson is up next with her cover of an Eddie Cochran song from her 2011 Jack White produced album The Party Ain't Over - which was released on Third Man Records.

Next up, we have live Neil Young with a song originally from his Tonight's the Night album.  I got this from a end of 2017 mix CD that a friend of mine made.


"Shelters" by The Deadline Shakes

Our second Scottish act, we have a track from the 2015 album Zealots by Glasgow based The Deadline Shakes.

Next, we have a cover of an Allen Toussaint song from the classic album South of I-10 by the one and only Sonny Landreth.  Toussaint is featured on the album along with Steve Conn - whose new album Flesh and Bones we are currently featuring.


"Throwin' Me for a Loop" by Danny Sandock

Next, E2TG favorite Danny Sandock with the title track from his fifth and latest album. Sandock is a California singer-songwriter who spent some time in Nashville.

And we close with Duran Duran from the EP of 1979 demos which we featured a year or so ago.  The demos feature early lead singer Andy Wickett.  Wickett was lead singer before Simon LeBon joined the band.