Rolling on, we come to another Trending Tuesday Shuffle - from our new music playlist.

We have another good, eclectic shuffle.... so, let's get to it! 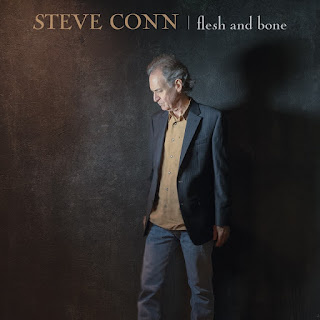 "Baby, You're Not Dead" by RJ Chesney

To start things off today, we have our first listen to Amateur Revolution the forthcoming new album by California singer-songwriter RJ Chesney. For this album, Chesney - whose music is rooted in the Deep South (Macon, Georgia and Biloxi, Mississippi) collaborated with Norwegian producer and songwriter HP Gundersen. The album was written and recorded in both Los Angeles and Bergen, Norway - with musicians from both cities. I'm digging what I have heard so far, and look forward to writing much more. This album will be released in April.


"Around and Around" by Steve Conn

Next up, we have another track from Flesh and Bone - the forthcoming new album by Nashville by way of Louisiana musician Steve Conn.  The Nashville release show is scheduled for two weeks from yesterday at Douglas Corner.  Another great album that unites Nashville and Louisiana in the best possible way.  Conn has had a long-running associated with the great Sonny Landreth - as seen in the video I picked for our playlist below. This song is a high energy song about the universal search for meaning and truth.

Shifting gears dramatically, we have the mellow, instrumental opening track from Lavine - the new album from Swedish artist Moist. A lovely song to accompany my commute.

How about a third instrumental track.  This is the lovely final track from Bats Fly Out From Under the Bridge by Scottish band Pilotcan.  I am really digging this album.


"Calling Your Name" by Parabola West

Next up, we have a first listen to a single release by New Zealand based, American folktronica artist Amy Tucker West who performs and records as Parabola West. The music mixes Nordic and Celtic folk influences as well as electronic and organic sounds. The result is lush and layered and lovely.


"Time is Ours" by Bruce Smith

Next, w have our first listen to 'Til the Wheels Fall Off - the latest release by Austin based singer-songwriter  Bruce Smith.  The album includes a tribute to Buddy Holly.

Looking forward to the Album Release show for Coyote Motel - the latest release from E2TG Favorite Ted Drozdowski.  Ted - as I have mentioned- starts with the blues and then launches it into the stratosphere. The release show - at The 5 Spot - promises to be wild affair. One of my favorite albums of 2019 so far.


"Fine Tomorrow" by Dean James and the Black Dogs

We have yet another first listen - this from UK rock and blues band Dean James and the Black Dogs.  Their album TRUTH came out late last year. The album was produced and mixed in the U.S.

After a shuffle that has included music from California, Norway, Sweden, New Zealand, Nashville, Louisiana, Ireland, England, Scotland, and Texas. We wrap up today's shuffle with a track that comes to us from the UK via the somewhat Brexit themed compilation Gonna Make It On Our Own.  The compilation features songs that sound like they could be about Brexit, but which in fact are now.  This is a track by English jazz musician Humphrey Lyttleton whose career spanned from 1945 to his death in 2008 at age 86. Toward the end of his life, he played on Radiohead's Amnesiac album.  Bad Penny Blues was not written about Brexit - but was a lovely jazz instrumental to close out the shuffle.