By the way, some behind the scenes technical information.  I got a new phone over the long weekend, and so this was officially the first shuffle off the new phone.  I did have to recreate my playlist. So the Trending Thursday shuffle tomorrow will be the first from the new Trending playlist.  I had to recreate it from memory.

I have not tried to recreate the Featured Friday playlist, and I am thinking of taking a different approach with that one. More on that later.

Let's get right to the shuffle! 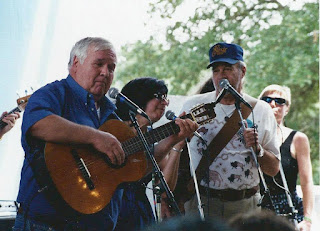 
"You Make it so Hard" by Christopher Aaron Slade

First up, a bit of barely contained innuendo from an album we featured a few years back - Guilty Pleasures.  I could not find anything still on-line about the artist. He was based out of California - if I recall correctly.  It was a really fun record.

A couple of years ago, we were doing a Double Shot show with the theme of Cities. I tried to pick songs about cities that had some significance to me. I wondered if there was any song named for my hometown, so I googled it and came up with this one.  I sent an e-mail to the band just to confirm that this song was about Cookeville, Tennessee (it was). The song was written at Muddy Roots one of the early years of hte festival.  It is a wonderful song, and I have gotten to know the songwriter on-line. I am really glad it didn't up being a bro country song  - but if it had I probably would not have even bothered writing to the band.


"My Washroom" by Caroline Cotter

Next up, we have the penultimate track to feature from the album Home on the River, by singer-songwriter Caroline Cotter. One of my favorites from last year.  I got to see Cotter perform at a $2 Tuesday late last year.

Next up, we have a live recording from the Tim Henderson Legacy Collection box set. Volume 3 features the songs of Tim Henderson - who was a Kerrville New Folk Festival winner in 1977 - performed by fellow Texas songwriter Allen Damron.


"Ghost Only Wishes" by Nova Flares

Nova Flares is the project of music artist Jason Wagers who is based in Kentucky.  His music is in the shoegaze/neo-psych/indie-pop.  It is really good stuff.  This is the final track from the self-titled EP that came out last summer.

Next up, and in the spirit of Wild Wednesday, we have a cover of a 1952 Hank Williams composition performed by Ben Fold Five from the Ben Folds rarities compilation Vault: Ben Folds Fifty Five.  It was recorded in 1996.


"The Rising" (Live) by Bruce Springsteen and the E Street Band

Speaking of live recordings - we have another from that Bruce Springsteen live recording from the River tour - recorded January 19, 2016 in Chicago. This is the title track to Springsteen's twelfth studio album released in 2002.

Next up, we have a favorite track of mine from the album Country/Folk by Well Worn Soles - a Florida-based duo featuring Chelsea Dix-Kessler and Emerson Wells-Barrett who met while studying old-time music at East Tennessee State University.


"I Coulda Been Me" by John Rey Reed

Next up, we have another track from Learnin' to Drive the Truck by Nashville by way of Austin singer-songwriter John Rey Reed.  This was the CD I got from the artist at a Christmas party back in December.

Next up, we have the primary version of "Songbird" from the album of the same name by the Korean artist who goes by the name Lions'Den.


"Blondie and Dagwood" by Adam Carroll

We close with one of my favorite (and may be the first Adam Carroll song I ever heard). It is off of Looking Out the Screen Door (2000) - the second studio album by the Texas singer-songwriter.  The album was produced by Lloyd Maines.  It is an ode to the iconic comic strip couple.