I am short on time - so let's get right to our Music City Monday shuffle! 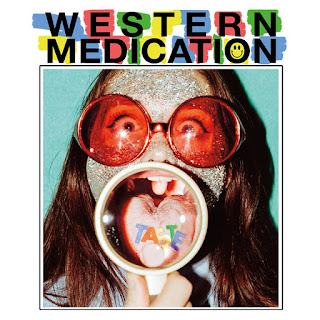 With Jason Ringenberg releasing a new album and playing a month long residency at The 5 Spot - my mind has been on Jason and the Scorchers quite a bit.  JATS were not the first Nashville rock band, but they were arguably the most important.  The Scorchers sometimes got lumped into the "cow punk" sub-genre, but that wasn't really accurate. They were either a rock band with a twang or a country band that rocked hard  - but honestly neither of those descriptions are accurate. I never considered Jason and the Scorchers to be a punk band. I say that because the first time I saw them live - at  Cat's Records in 1985 - when some people up front tried to start a mosh pit - Jason pointedly said, we are not punk. While Jason bounced around the stage - a blur of arms and legs and while Jeff and Perry held down the bottom end - it was Warner Hodges who provide the fire. I am not a guitar player, so I cannot comment on Warner's technical proficiency, but I can say he has always done what he does better than anyone else. This is a track from his album Right Back Where I Started.  Warner keeps busy - he still plays with Jason and the Scorchers when the play, he is a member of Dan Baird and Homemade Sin, he is a member of The Bluefields - whenever they get together, he was a member of Drivin' N Cryin' and has been known to join them on occasion.  Warner is a powerful guitar player and he can still sling his axe around his neck without missing a note.

"Precious Times" by Walk the West

If JATS were a country band that rocked (or vice-versa), Walk the West were a Western band that rocked (or vice-versa).  I guess you can say, our first two songs in this shuffle cover both kinds of music... Led by the late Paul Kirby - Walk the West were one of my favorite bands to see live back in the mid to late 1980s.  Their shows were always high energy and loads of fun. This is a track from their self-titled album - a woefully underappreciated, under promoted album. One of my favorites.

Becky Warren is one of the best of the "new" Nashville artists.  She has toured with Indigo Girls.  Her latest album Undesirable was released in October.  This one goes back to her War Surplus concept album.


"Save a Life" by Anne McCue

Anne McCue is a force.  An amazing songwriter, a killer guitar player (I hear she plays the Tuba, too), a DJ, and more.  This is from her album Blue Sky Thinkin'. I love this album so much - as I do everything Anne does.

Another of the best of "new" Nashville.  Madeleine Besson is French, but she was raised in L.A. She has been in Nashville 3 years. She came here not knowing anyone and has found a home. Her latest album Journey Home - is about that move. A beautiful album of wonderful songs.

From Keeping Time - the latest album by E2TG Artist of Forever (or whatever I called the award).  With his more recently songs, Tim Carroll has expanded the subject matter of his songs greatly.  This song is about coal mining and his childhood in Indiana. Carroll is a most important figure in East Nashville. Holding court every Friday at The 5 Spot (I honestly cannot remember the last Friday he missed). Backed by a shifting rhythm section (with a few stalwarts) armed with his guitar and amp (no pedals) - Carroll plays two and half hours of all original  music without a break. If you find yourself in Nashville on a Friday night, I highly encourage you to make your way to The 5 Spot at six o'clock. You will not be disappointed.

There is - for sure - a lot of great music of the Americanaish, countryish, folkish variety coming out of Nashville these days. Fortunately, there is also a ton of awesome music that doesn't have anything to do with those genres. It is hopeful, that their are young people making exciting, original rock music in Nashville here at the tail end of the 2010s.  Western Medication are among best. This is a track from their album Taste. The band features WXNA DJ Sweetbaby Josh on guitar.  The band's music evokes several different influences including quite a few from my initial era of music - and they do it all with originality. Rites of Spring is an annual festival held at Vanderbilt University. I have no idea is this song has anything to do with the festival - but I attended the 1986 Rites of Spring with Jason and the Scorchers, Swimming Pool Qs, and the Feelies.

I am so glad that Robyn Hitchcock qualifies for Music City Monday.  This is from his most recent studio album (his twenty first).  Anne McCue plays guitar on this album. Robyn Hitchcock's music has been a part of my life for decades and it is so cool to occasionally see him around at shows - and to see him play improtu sets around town.

We have been featuring Amelia White's new album Rhythm of the Rain (I had such a great time at her album release show), this one goes back to her 2002 Blue Souvenirs album (which gave its name to her always fabulous band). In digging around for the video for this song, I found that the song was also included on an earlier album Comes and Goes which was released in 1999. I know I rave about the wonderful local music community here in Nashville. The fact is, I have never met a finer group of people. The musicians and figures who form the heart and the soul of this community (Amelia is one) enlighten and illuminate my life.