One of those not-so-rare, but still super special nights in Nashville  - which means way more going one than one person can possibly see. Amazing musicians and songwriters making amazing new music, good hangs with good friends.  Highlights include seeing the legendary Jason Ringenberg perform songs from his new album Standing Tall and songs from his long career - including some Jason and the Scorchers classics and the Teletubbies theme song!

A drive from The 5 Spot to Dee's with Jon Latham talking about punk rock music and other stuff.

Getting to at least hear one song by Sally Jaye, and then Amelia White celebrating the release of her new album Rhythm of the Rain with a powerhouse band and backup singers whose credits and connections read like a history of American music over the last thirty or so years.  The show closed with a stirring rendition of White's "How it Feels" with an all-star chorus on stage and a bar full of singers off stage. The song reflects the experiences of LGBT+ individuals growing up in the South.  The communal experience in a "Country" bar in that same American South coming at a time when our nations leaders seek to roll back progress and bring back discrimination was a powerfully defiant, hopeful, and joy-filled experience.

This has been a rough week overall - emotionally. I don't know if it has been this crazy weather or something else.  Last night was wonderful medicine, but I'm still happy to put this week to rest.  We have one final shuffle for the week - it is our weekly Featured Friday shuffle.  Don't worry about what this playlist is or isn't.  We have some cool songs - so enjoy! 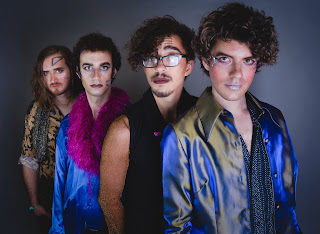 "The Money Game" by Dylan Rodrigue

Next up, we have another track from the recently released Cat's Game by Californian indie rock singer-songwriter Dylan Rodrigue. A really great song to start out this final shuffle of this first full week of February.


"In a Field Full of Sheep" by Noctorum

Next up, we have the lovely first listen to The Afterlife - the latest album from Noctorum - which is a collaboration between Marty Wilson-Piper (The Church) and producer Dare Mason.  Noctorum began in 2002. The Afterlife is their fourth full-length album.  Loving what I am hearing so far.  It is great hearing this new music.  I have been a fan of The Church for decades and I followed some of Wilson-Pipers early solo projects.

Next up we have another track from that Gonna Make It Alone - the compilation put out by Atomicat Records.  This song is a 1956 recording by Kentucky rockabilly singer Norman Bullock.  You can bet that in 1956, "Lies, Lies, Lies" was not about Brexit, but in the context of this compilation it is easy to think it might be...


"Blood Under the Bridge" by BlackieBlueBird

Next up, we have another track from the lovely Ghost River EP by Danish duo BlackieBlueBird.  Two days in a row for this album.


"Nobody Lights My Heart Like You" by Jim Wyly

Next up, we have another track from The Artisan by singer-songwriter Jim Wyly.  The Artisan - Wyly's solo debut was released last year when Wyly was seventy one years old.  It is a finely crafted collection of songs.


"Flashback" by I Ya Toyah

I Ya Toyah is a Chicago based one-woman industrial electronic project and the latest album is called Code Blue.  This is a powerful track.


"Heart Above Water" by Stuffy Shmitt

Since I heard the Stuffy Shmitt live - I have been a fan of the Nashville by way of New York City singer-songwriter.  Stuffy is tall (of course I am pretty short so... but I think he above average tall maybe) and he has a shock of hair on top his head.  He definitely gets your attention. On social media, he is quirky and funny with a dose of gleeful madness. When he gets on stage and sings, though, the only thing you hear are his amazing songs and his wonderful delivery.  I recently got to spend a little time with Shmitt and a got hold his albums - made while he was living in New York and featuring several well-known musicians. Expect these songs to pop up over the next several weeks and months.  Our first listen from this group of albums is a wonderful track from his 2000 album Nothing is Real.


"Hollywood" by Dean James and the Black Dogs

Next up, we have the lead track from Truth by UK band Dean James and the Black Dogs. This is our second listen, and I am digging this album.


"A Pretty Face" by The Blam Blams

I think The Blam Blams are one of the most exciting new bands on the Nashville scene. They are a next generation glam rock band.  They released their debut EP -Roll On in January. The CD release show is set for Monday night at The Basement.

And we close things out with our final track to feature from Knoxville Skyline by Austin musician Jon Dee Graham. Jon Dee Graham was a member of the legendary Austin bands The Skunks and True Believers.  He played on John Doe's solo debut - Meet John Doe.  Closer to home he has ties to two of our favorites.  Knoxville Skyline features Tim and Susan Bauer Lee of 2018 band of the year - Bark.  And recently, Graham has been touring with E2TG Artist of the Year - Ben de la Cour.