Moving on, we return to our "New Music" playlist for another "Trending Tuesday" shuffle at E2TG.

A whole lot going on in my life, in Nashville, and in the world.  Although I have been known to use this pulpit to talk about things that are important to me (and I may do so again - probably will), I mostly want E2TG to be about the music. From day one, I knew that there were a lot of things that E2TG could never be - so I never tried. I have gone off on some tangents over the last eight years, but I keep returning to the simple truth of what E2TG is all about:  "I heard some cool music this morning that you might or might not know - let me tell you about it." 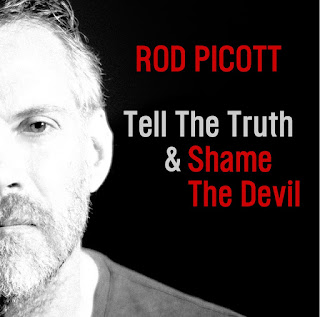 Tell the Truth and Shame the Devil - the new album from Rod Picott will not be out until July 19 (my daughters' birthday), but today we have my first listen, and I am so excited to be able to feature this album. The album sounds fantastic - the songs are spot on - as I would expect. I can tell from my first listen that this is going to be a favorite of mind.  Picott is an author as well as a musician/songwriter. He recently published his latest book. I had the amazing good fortune to read with him at a spoken word event last year - at the Radio Cafe - which sadly just closed their doors.

Next up, we have the first of two tracks from Josh Gray's Songs of the Highway album. This one is a solid rocker.  We had the chance to sneak peak a track from this album before it was released, and I was able to attend his CD release show a few weeks back.


"Anger and/or Rage" by Gary Daly

Next up, we have another track off of Gone From Here - the new album from China Crisis singer and keyboardist Gary Daly.  The album was released back at the end of May, and I am really digging it. I always loved China Crisis (I played them Saturday on Double Shot), and I am loving the lush sound of this album.


"Don't Give Up" by RJ Cowdery

Next up, we have another track from What If This Is All There Is by Ohio based singer-songwriter RJ Cowdery.  I am loving this album - Cowdery has an amazing voice and writes great songs.  The album has a strong Nashville connection it was recorded in Mt. Juliet - and was produced by Amy Speace (who sings on the album) and recorded, engineered, and mixed by Thomm Jutz (who also plays on the album).

Next, we have another track from Seen Enough Leavers  by East Nashville's own Meghan Hayes.  Hayes rounds up a stellar cast of players, and they all sound fantastic, but as I have said before, it is the songs that shine through. This is a powerful statement of survival. I was lucky enough to be able to attend the CD release of this album a few weeks back. It was fantastic.


"Thirst for the Limelight" by Big Tide

Next, we have another track from Sync or Swim by UK-based Big Tide - who play a delicious brand of California power pop. I fell in love this this album at first listen, and I am still digging it a lot.


"All Out War" by Josh Gray

Track number two of the day from Josh Gray - off his new album.  The album is getting rave reviews, and I have to say - as someone who was already a fan - the album still blew me away. I know Josh Gray poured everything into this album and ran a successful crowdfunding campaign. It is great to see this talented songwriter getting the attention he deserves.

Next up, we have a track from Satisfied by blues harmonica player, songwriter, and singer Tim Gartland.  Gartland come up musically playing with many greats, and he has put together a solid band of experienced musicians for this effort.  The combined credits of the album players consists of (partial list):  Delbert McClinton, Brian Setzer, Susan Tedeschi, Duke Robillard, Wallflowers, Joe Cocker, Vince Gill and more). The album was produced by Kevin McKendree (who plays on the album as well).

We close with another track off of Ragged Heart by Portland, OR based husband/wife duo Silver Lake 66.  I love the harmonies on this album. Overall, the album sounds fantastic. Really wonderful stuff - they are a "new to me" artist that I am excited to be able to feature.