In a bit of a reflective mood.  Which I say just to indicate that in the words that follow, I am addressing my self and my tendencies - not anyone else.  One thing that E2TG has helped me with is a sense of insecurity about forming original and even unique opinions about music. I remember when I was young and first getting into music - in a major way - I would hear a band I had never heard before and really like what I heard, but then I would feel a need to get reassurance from someone else that it was really "good" music. I don't think I am totally unique in this and I don't think writing E2TG has 100% "cured" me of this tendency (it is still nice to have an opinion validated by someone whose opinion I trust), but I think it has improved things.  The bottom line, as far as I am concerned, is that my opinion (and yours for that matter) is not contingent on what anyone else thinks. I guess that is why I am not a fan of trashing a band or artist just because I don't like them.

An extreme example:  When Jon Landau famously declared, "I saw rock and roll's future and its name is Bruce Springsteen," (ignoring for a moment the influence the statement had on Springsteen's early popularity) he was stating an opinion. And certainly, some people have a keener ability to spot talent and potential, but it was an opinion nonetheless. What if Springsteen's first album had flopped and he had given up music and disappeared into obscurity. If that had happened, Landau's quote would have been forgotten and perhaps rightfully be seen as a mistake. BUT - it would not change the feeling that spurred the statement in the first place. I have seen bands that struck a chord with me  (maybe not the future of rock n roll - but a great show) whose careers by some measure would sooner or later fizzle.  That does not mean that the feeling I initially experienced was wrong.

In terms of E2TG, I always write about music that I like or love. Always. Over the years, I some of the people whose music I love - have thrived in music (as much as any artist  can thrive these days) while others have (seemingly) mostly given up music to pursue other opportunities (and everywhere in between those two extremes).  One reason, I don't really look back but rather keep moving forward is that knowing the outcome shouldn't and for me doesn't  affect the veracity of my initial impression. I have written about bands or singer-songwriters whose music moved me deeply and who I believed should be known by a wider audience. I trust that initial feeling to be true - regardless of where that band/artist ended up.   (This is not say that my opinions may not change over time - there is music I loved in college that I don't really want to listen to now, however, that change is not in any way a reflection or result of the relative success or lack therein of the band).   (I will leave the moral/ethical questions about what to do or not do when an artist ends up being a serial killer or whatever - for another discussion).

I have to move on.  After catching Jon Byrd and Paul Niehaus at their weekly show at Dee's, I made the decision to go to $2 - where other than Derek Hoke - the line-up was mostly artists I didn't know (or at least configurations I didn't know).  Surrounding an extended set from Derek Hoke (with Paul Niehaus again and his usual band of Mark Robertson and Steve Latanation)  I saw two singer-songwriters named Mike. Mike Frazier from Virginia did a solo set and Mike Lynch - relatively new to town did a set backed by Mark Robertson (again) and I drummer whose name I missed). Great sets by both Mikes.  The late night slot was MASS - a relatively new project (drum and keyboards) featuring Jimmy Matt Rowland (who I most recently saw playing with Brian Wright) and Jon Radford - who it seems I keep running into - playing in many great combos. MASS was incredible - loungey instrumentals (but that description is lacking).

On to the shuffle!  Wild Wednesday gets wilder! 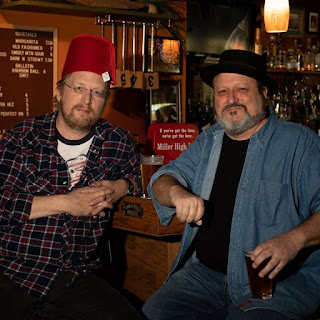 "Fatigue (Numb Redux)" by The Transcendents

Our old friends from New Zealand return to the shuffle with a track from their 2017 album Dirt Songs. I always dig this band.

Another quick sneak listen (by me not you) to Perspective by New York singer-songwriter Ben Arthur.  Arthur is launching a new podcast on June 11 on the intersection of songwriting and literature (something he has been exploring through his own music for the last several years - if not longer).

Next up, we have a cover of a John Hartford song from the 2010 album Diamonds and Gasoline from Turnpike Troubadours who recently announced they were going on indefinite hiatus.

Next up, something completely different but nonetheless cool - we have Pas Musique - a NYC based electronic music collective - from their latest album The Phoenix.


"Never Tear Us Apart" by INXS

Next up, we have INXS with a single from their 1988 sixth album Kick.


"My Boo" by Ghost Town DJs

I was doing the Running Man Challenge all the way into the office (not really) while listening to this 1996 single (the only single) by the short-lived sensation from Atlanta, Georgia.  I am not entirely sure when and under what circumstances this got into my phone, and I have to admit - my life was pretty busy with family things in 1996 so I was not even familiar with this song - but I liked it.

Another track from Chug it Down and Go  - Daniel Seymour on lead vocals for this track. Mart Robinson will be make a semi-rare appearance with The Mark Robinson Band - a week from this coming Saturday (June 16) at The 5 Spot. Highly recommended that you catch this show if you can.


"Long Lost" by Better Than Ezra

Next up - a track from Friction Baby - by New Orleans band Better Than Ezra. This and the INXS track were from CDs I found a thrift store.


"Walking Out" by Jerry Bryan and the Houndogs


We close with some 1960 Texas rockabilly (because why not) - this is track from that whacky Brexit compilation (get it "walking out" Brexit).