I had the chance to catch Martin Scorsese's new film Rolling Thunder Revue: A Bob Dylan Story last night at the Belcourt - Nashville being one of 10 or 11 cities hosting this one-night only big screen showing.  The film debuts on Netflix today. I highly recommend it even if you are casual Bob Dylan fan. It is a remarkable bit of film making and some magical moments captured from the Rolling Thunder Revue tour.  I won't say any more, and I recommend against reading too much about the film before you see it.

I will say that members of the theater audience applauded several times following live performances and also laughed out loud on more than one occasion.

Today, I have an opportunity to cover a show at City Winery and to write a review. It has been a minute since I have done a formal live review - so look for that soon.


On to another "Wild Wednesday" shuffle. I think this one lives up to the name... 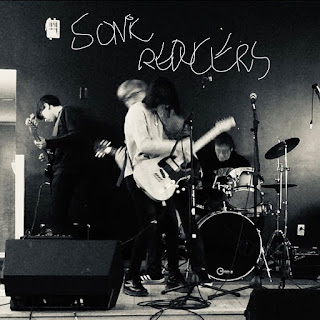 "The Onions" by Sidney Bechet

We start things off with a song by jazz composers, clarinetist, and saxophonist Sidney Bechet - who was born in New Orleans in 1897.  Bechet beat Louis Armstrong to the studio by several months and was one of the first important jazz soloists.  The Onions (Les Oignons ) was one of his many hit recordings.

Next up, we have one of my favorite songs by a long-time E2TG favorite Leland Sundries. The band formed in Brooklyn - band leader Nick Loss-Eaton now lives in Memphis. This song was originally released on their 2010 The Apothecary EP - today I heard a live version from their 2013 releae Live at the Creamery.

Funny how the shuffle works - it has been some time since a song by New Zealand band The Transcendents had come up. One came up last week, and today we have a another - a 0:58 second song from their Dirt Songs album.

Next up, we have a track from  Orthophonic Joy: The 1927 Bristol Sessions Revisited -  The album was 2015 compilation with contemporary country artists recording new versions of songs recorded in the now legendary 1927 Bristol Sessions - which featured the first commercial recordings of The Carter Family and Jimmie Rodgers.  Here Stuart does a version of the traditional song Black Eyed Susie.

The Mouse Outfit and their album Jagged Tooth Crook was one of my favorites from 2018.  The Manchester based hip-hop collective collaborated with some of their city's best. I have really loved the sound and the vibe of this album. We have just a couple more tracks to feature.

Next up, we have a track from the 2017 self-titled album by Atlanta based band Collins Drive. Great sound, great songs.

Recently, I have posted some songs by a new band called Them Airs - which features members of The Foresters and I have mentioned that the band also features Cade Williams who is the creative force behind Smokey the Firebear - an experimental artist we featured a couple of years ago. I realize that some more recent readers may not have been reading when we featured several tracks by Smokey the Firebear - including many from albums that are no longer available. This is an 0:18 second sound collage from an album that is still available (I will post the track since it is not on YouTube). I do have to add - the album from which this track is taken was released in 2015.  Williams is just 18 or 19 now, so do the math and that might explain why when I downloaded the album - it was called BNGFKR. It is now listed on bandcamp as bongfucker - I'm glad to have that mystery solved. Enjoy


"All Your Thoughts" by Ajay Mathur

Little Boat by Ajay Mathur was a favorite of ours from 2018.  We featured it over much of the year.  This is actually our last track to feature from that album, and I have to say, it was great to be reminded of how much I loved this record.


"i know better" by Sonic Reducers

I mentioned Them Airs under the Smokey the Firebear track (I'll wait while you go back and re-read that.............) So, I mentioned that two members of The Foresters were in Them Airs. Another member in in Sonic Reducers - which is based in the college town of Ithaca, New York. Sonic Reducers is a punk band and I am digging their self-titled debut album quite a bit.

We close with a track from Love and a Gun - the 2017 EP by California singer-songwriter Michael Tiernan.  Great to be reminded of another artist/album that I loved quite a bit.