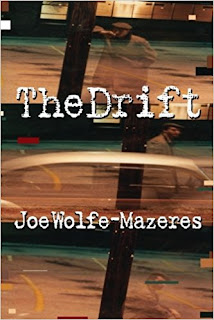 
As I have implied several times during the posting of the 2018 Earie Awards, there are two keywords for this year on E2TG: Growth and diversity. The amount of new music that came my way in 2018 was incredible and at times almost overwhelming. One morning, I looked at my e-mail and realized that I had received ten inquiries/submissions before noon (maybe before ten). I was able to feature more artists and bands then ever before - even so I know some worthy music slipped by me.

When it came time to do my recap of 2018 (which is what my "Earie" awards really is), I was once again overwhelmed. (Maybe overwhelmed should be a keyword for 2018). During the year, I started creating playlists on Spotify to highlight the music featured each month. It was an imperfect system - not all music I feature is on Spotify, but it was something. So, when it came time to do the Earies, I decided to use those playlist and fall back on the bread and butter of E2TG (the shuffle). All throughout December, we revisited each month and awarded Earie Awards - about 90 in total.

As you might expect, even with featuring 90 artists and bands from throughout the year, there were still some that didn't get included. The shuffles were random. I don't have time to recap all the great music that didn't make it into an Earie shuffle. I wish I did, but I am eager to get on with the new year.

Still, I have a short list of about nineteen bands and artists that I wanted to be sure to mention.

Read a bit more after the jump.


To break this up into bite-sized pieces, I am breaking the list of nineteen into a few groups.

I need to make clear this list - even though my exposition may be less - should not in any way be considered "also-ran"s or runners-up to the Earie Awards handed out during the month. They simply didn't make it into the randomly generated shuffles. Okay?

2018 Earie Awards go to the following:


Jon Byrd -for his wonderful Dirty Ol' River album and his tireless schedule of local shows.

Palm Ghosts - for their album Architecture and for bring a bit of Manchester sound to Nashville.

Matt Campbell - for his album The Man With Everything, and for his role in making American Legion Post 82 a cool thing. (with Campbell - Buck N Stuff would likely not have played their residency last year - which resulted in their album this year).

Daniel Seymour and Mark Robinson - for their album Chug it Down and Go and for proving that doing something "just for fun" can sometimes have great results.

Tom Mason and the Blue Buccaneers - for their instructional album If You Want to Be a Pirate: Songs for Young Buccaneers and for being the best damn pirate band around. Special mention to those who convinced this skeptic to check out the pirate band a few years ago.

Willie Dustice - for How 2 not be Consumed with Existential Dread and for helping to secure the notion that Nashville is the home to all kinds of amazing music.

Griffin Winton - for I'm Not Trying to Flirt with You or Anything - an incredible album and for being the breakout artist of 2018 as far as I am concerned. The "Big Dumb" set at the Drive-by Truckers tribute show over the summer was like Winton's debutante ball.

Bob Lewis - for his new album End of an Error. Some may only have known Bob Lewis as a bartender at The 5 Spot. All of that changed with the release of his new albums and the shows leading up to and following the release.

Nathan Bell - for his two albums Er Gwaetha Peb a Phopeth  and Loves Bones and Stars, Love's Bones and Stars.  And for as I have said many times (because it is true) for being a truth-teller at a time when the truth seems elusive and rare.

Low Society - for their album Sanctified and for helping to keep high impact, high energy blues alive and thriving.

Danny Sandock - for his album Throwin' Me For a Loop and keeping things real, having a sense of humor, and writing wonderful songs.

Angie Aparo - for this album Life is a Flower, Life is a Gun and for overcoming adversity and making magical, inventive music.

Flesh Eating Foundation - for their release "We Are Fucked" and for telling truth in their own way. Also for helping to make 2018 our most diverse year yet.

Jon Magnusson - for his Always a Rebel release and for making more music than I could even keep up with. Also for his inventive and tireless efforts to promote his music and the music of others (and for becoming a new father).

Speedbuggy USA - for their album Kick Out the Twang and for being worthy heirs to the great "cow punk" bands of my youth.

Brad Fielder - for his release Country Folk and for his song Farmer's Demential Blues - one of the funniest songs I heard this year (and among the funniest ever).

Blue Largo - for their album Before the Devil Steals Your Soul and for making delightful music that has things to say.

Polly Panic - for the album Losing Form and for the reminder that the cello can rock.

Jim Wyly - for his album The Artisan and for crafting as a fine a collection of songs as I have heard in a while.

Collins Drive - for their release This Town of Mine and for making great music and for dealing with the limitations of my technology (their earlier release somehow got buried in my song-list just surfacing again in time for this new release).


Finally, some Earies for people who didn't have music featured but without whom E2TG would not be what it is....

The P.R. people and promoters: the overwhelming majority of the music I feature on E2TG comes my way from people who work to get the word out.

Shauna McLarnon - if it's a little weird, a little loud, a little different, and wonderful - there is a good chance it came to me via Shauna and Shameless Promotion P.R.

Kim Grant - I am so glad I finally got to meet Kim this year. She is responsible for bringing me some really wonderful music from some top-notch talents. KG Music Press.

Adam Dawson -  I got to meet Adam Dawson this year, too. When he is not helping to spread the word about some of my Nashville friends and faves, he is introducing me to incredible music past, present, and future. Broken Jukebox

Jill Kettles - Over the years, Ms. Jill PR has brought some incredible music to E2TG. Last year a highlight was Eli Cook. This year it was Angie Aparo and Mark Huff.

Karen Leipziger - An wonderful songwriter in her own right, Karen is deeply connected to roots and blues music, and I know that an envelope from her means I'm about to hear something that may be new to me, but that will almost certainly be a new favorite artist and album.

Sue Havlish for not only being my partner in radio crime but for being a tireless reader and champion for E2TG (and for helping me get my novel out in the world) (The Drift - available now!)

The 5 Spot for hosting the last three years of anniversary shows and residencies for E2TG.

Viola Krauss, Jan Zijlstra, Gina Frary Bacon, Ward Weems, Crystal Rhoten, and Rachel Fox (and others) for seeing all the shows I didn't get to see (and many of the ones I did).

Still to come to 2018 Golden Earie Awards - Bands and Artists of the Year!  Then I can finally shut the door on 2018!