Well, this post will wrap up the first full work week of 2019.  For those new here, I typically post shuffles every day I'm at work (with a few exceptions). The shuffles are just the random song shuffles of what I listened to on my way to work.

Here is a run down of a typical week at E2TG:

Monday - Music City Monday - a shuffle from a special Spotify playlist of music from people who live or have lived in Nashville. It is the only shuffle that comes from Spotify. I created this just to give a glimpse into Nashville's musically rich past, present, and future.

Tuesday and Thursday - Trending Tuesday and Trending Thursday - a shuffle of the newest of the new songs to the E2TG playlist. This is new for 2019.  I am going to try to keep this playlist fairly small and rotate music in and out more often.

Wednesday - Wild Wednesday - a shuffle of ALL the songs saved to my phone memory card. This shuffle can be anything from new stuff, classic songs, rare/weird tracks, songs ripped from CDs I've owned for up to 30 years.

Friday - Featured Friday - This shuffle comes from the "Featured Friday" playlist.  This list is also kind of new. It is basically the old "New Music" playlist (music submissions from late 2017 to 2018, but it also includes all music from the Trending playlist, plus any new to me music I get which doesn't fit the "Trending" designation - for example - I got a mix CD for a friend over the holidays - that is included here, I received a CD as a gift - that is included here.


The Video Playlist - every day there is a shuffle, I create a Video Playlist (a YouTube Playlist) as a representative playlist for the daily shuffle.  The approach I generally take is,  if I find an "Official Video" in my cursory search, I include that video, if not, if there is one of those automatically generated videos, I include that, otherwise, I include interesting live clip of the song or at last resort - I will include a "fan-made" video.  If I cannot find a video of the song at all - which sometimes happens - especially if the song is from an upcoming release, I pick a different song to represent. Rarely (although it happened yesterday), I cannot find any video by the artist in question, in which case I just skip the song.

The video playlist is really just a convenient way for E2TG readers to hear a playlist similar to the one I listened to on my commute. 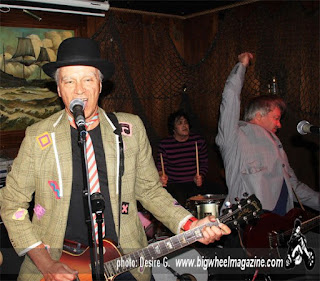 "Coast to Coast" by Klammer

We start off this shuffle with the first of three favorites from 2018.  You Have Been Processed was our introduction to Leeds-based post punk dark pop band Klammer.  I could not find a video clip of this song, so I posted a different song.


"Flex With Ya" by The Mouse Outfit (feat. Kinkai)

Manchester hip-hop group The Mouse Outfit are  next, their album Jagged Tooth Crook was my introduction to this band - who frequently collaborate with other members of the Manchester hip-hop/neo-soul community.


"Way of Life" by Neville and Sugary Staple

Two-tone ska legend Neville Staple (an early member of The Specials) and his wife Sugary Staple released Rude Rebels in 2018 and caught our ear. Fellow former Specials member Roddy Radiation also appears on this album.  The Specials were a favorite band of my growing up, so it is great to hear this new music from two of the creative minds behind those songs.


"Gold for Silver" by Christopher Sky

Next up, we have a second listen to Vastness by L.A. based experimental composer and multi-instrumentalist Christopher Sky.  This is moody, introspective, and ethereal music that I like a lot.


"Alone with You" by Evan Jewett

Evan Jewett is a NYC singer-songwriter who released his album Don't Feel to Work back in September. Jewett is also a furniture maker and this is his first album released under his own name.


"Bye Bye Baby" by Walter Lure and the Waldos


Walter Lure is one of the last living members of the Heartbreakwes - the band formed by Johnny Thunders and Jerry Nolan formed after they left the New York Dolls and Richard Hell after he left Television. Lure formed the Waldos upon leaving the Heartbreakers. I was so thrilled to be able to feature Whacka Lacka Boom Bop A Loom Bam Boo - the latest album. It is a whole lot of fun.