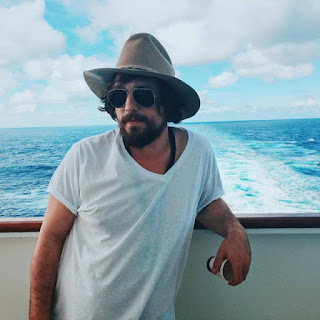 E2TG's connection to Darrin Bradbury goes back to 2012 when his old band Big Wilson River was a "Featured Artist". What I didn't know is that the band was in their final days, and I never really connected with them - although I had several mutual friends.  Fast forward to late 2013 when one of those mutual friends Papa Tunes (who was a vital part of the early days of E2TG) sent me a message that Darrin was moving to Nashville and that I should keep an eye out for him. I immediately went out and found some music he had out on Bandcamp - mainly a collection of demos called The Almost Great Crepes. I was utterly blown away by his songwriting.

Darrin moved to Nashville with bassist Cameron Carrus (Buck N Stuff, Tim Carroll, Nikki Bluhm etc) and lived for a time in a car in the parking lot of a Wal Mart. He also started playing every open mic in town and meeting fellow musicians and songwriters.

Early 2014, Darrin went out on an extended tour and my life kind of fell apart.  Meanwhile, his songs started showing up in my shuffle - like every day.  Finally, in the Spring of 2014, I met Darrin in person.  In the Fall of 2014, I followed Darrin to open mics of every kind imaginable. Through him, I met a bunch of people. I began to dig myself out of a personal hole and E2TG was revitalized.

We had a lot of late night, early morning conversations when he was working the back door at The 5 Spot.

Last night, on my birthday - no less - I learned (officially) that Darrin had signed to ANTI- Records out of L.A. - the home of Tom Waits, Mavis Staples, Wilco, and so many more. I could not be more proud of him. I claim no part in his success, but I am grateful to have been along for what has been an incredible journey.

As is always the case, the road ahead is filled with unknowns, but I will happily follow along and see where and how it goes.


I need to add - there is no formula for success and I do not consider myself to have any particular skill in assessing who will or will not be a "success" (whatever that term means). I simply write about music I like and love. In the 7 and a half years of E2TG, I have written about artists/bands who I thought were incredible who are now no longer making music. I knew Darrin Bradbury was something special, but I didn't know if anyone else would ever see and know that. I am happy that it appears that some have.


Back to the here and now.   I am super-stoked about the variety and quality of the music in my new "Trending" playlist.  It's Tuesday - so let's shuffle!


"Learnin' to Drive the Truck" by John Rey Reed

First up, the title track to the most recent album by long-time Austin (now Nashville) singer-songwriter John Rey Reed. The album is in the "new to me" category.  I absolutely love this coming of age song.  The album has ties to both Austin and Nashville (it was partially recorded in both music cities).


"Roll on Through the Night" by Ted Russell Kamp

I have been hearing the name Ted Russell Kamp for years around Nashville. I finally met the California singer-songwriter-musician during Americana Fest this past September. Now, I am thrilled to present our first listen at his forthcoming new album Walkin' Shoes which is due out March 15th.  I am captivated by this first listen and looking forward to digging deeper and writing much more. The album features some big name L.A. musicians including Sam Morrow (who was a featured artist on E2TG years ago) and Jaime Wyatt.


"I'm Really Not That Kind" by Pete Berwick

Next up, we have another first listen.  Pete Berwick's new album, Islands is due out on Friday. Berwick is a musician and author.  He recorded an album in 1992 that was shelved by the powers that be on Music Row. That album, Ain't No Train Outta Nashville" was finally released in 2007.  I noticed that among the quotes in the press release about this album was a quote from Nashville legend Chris Gantry. I am excited to have this album in my playlist and look forward to writing more. I dig what I have heard so far.

Following the three countryish/Americana-ish/rootsy songs to start the shuffle, we shift gears abruptly with the instrumental version of a song we featured last week. Fjorka is an Irish musician/producer whose credits include The Clash. This is eclectic and interesting music. A great add to my morning shuffle.

"Taken Away" by Twilight Fields

Next up, we have another track from the forthcoming Songs from the Age of Ruin by Twilight Fields based out of Northern Canada.  Really enjoying this album - which contains a cover of Bruce Cockburn's "Lovers in a Dangerous Time".  We have a video of a different song by this band.


"You Get What You Give" by BYSTS

BYSTS are from Salt Lake City, Utah. They released their EP Dreamland last Friday. Our first listen is this noisy, post-punk song. Some great stuff.  More to come!


"Rhythm of the Rain" by Amelia White

And we close out the shuffle back in the musical neighborhood of where this shuffle started. We have the title track to Amelia White's awesome forthcoming album.  Amelia White is an E2TG and East Nashville favorite, and with Rhythm of the Rain, she has made what may be her best album (out of several incredible albums).  A great close to the shuffle.