Sometimes I have random thoughts about society and life and I think, gee, I wish I had a place to share these thoughts besides as  Facebook Status Updates. Then, I remember, hey! I have a blog that I post to every day.  That being said, please feel free to skip my self-indulgent rambling ahead.

Lately, there is something I have been pondering. Namely, why so many people seem to devote so much energy to music, movies, books, art, celebrities that they don't like. (For this purpose, I am excluding criticism of current government leaders - however, there is possible still some relevance). I have seen instances were an article appears about a particular band or artist or whatever, and rather heated debate ensues between those who like said artist and those who despise said artist. What is interesting to me is not the debate or posts themselves but the amount of thought and attention that goes into the comments of those who don't like... nee hate... the said artist. Like they offer detailed explanations that demonstrate a deep familiarity with the said artists work. And it seems clear that they devote a significant amount of time, energy, and head-space to the despised artist's work. And, they seem invested in trying to convince fans of said artist that they are "wrong."

Don't get me wrong, I encourage anyone to listen to music before  dismissing an artist or album whole cloth, but I just can't understand. There are certainly bands and artists that I really do not like. I gave a listen and decided it just wasn't my thing. I don't feel compelled to "straighten out" people who actually like them. I have neither the time, energy, or inclination to dissect and analyze all the reasons I don't like their music. I get if a professional journalist is tasked with this, but as an amateur and more importantly, as a music fan, I don't understand it. There is more good music being produced than I can possibly take in (and arguably I spend more time than the average person listening to new music). If I spend time on the bands I hate, I would have even less time for the bands I love.

And yes, I do recognize the irony of using time and blog-space to even write about this.


Speaking of new music!  I loaded even more new music into my phone last night - including a couple I am really excited to feature coming up soon.

Today is Thursday and it is time to dive back into the "2019 Trending Playlist" of the newest of the new arrivals at E2TG, 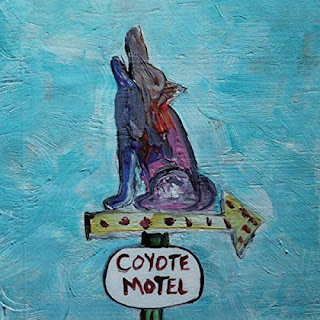 We start things off with another track from the outstanding album, Learnin' to Drive the Truck by Nashville by way of Austin singer-songwriter John Rey Reed.  A good combination of humor and wisdom.  The album features musicians who have backed legends like Joe Ely and others.

E2TG favorite Ted Drozdowski returns to the shuffle with our first listen to his forthcoming new album (available for pre-sale now). Coyote Motel is the name of the album and the new project from the Nashville guitarist, songwriter, journalist. Recorded in part at Mark Robinson's studio (where we record the pre-recorded Double Shot shows). This is a strong album that demonstrates what I have always felt is Drozdowski's forte. He has lived and studied the history of blues music - including spending a considerable amount of time with the late R.L. Burnside. It is clear, though, that Drozdowski is not a purist - rather he seems to embody the blues as a living art form, and his grounding in the music and the culture allow him to soar into the stratosphere - pushing the limits of genre and style. Still, due to his soul deep roots in the music, remains tethered to the source while flying circles around lesser artists. Coyote Motel is a great album - worthy of your time.


"Page, Take Me to the Lair" by Pilotcan

Next up, we have a second listen to Bats Fly Out From Under the Bridge - the first album in 14 years by Scottish band Pilotcan. This is the lead track from the album, and it is stunning.   The band already have the follow-up album in the can - it is set for release later this year.

Songs from the Age of Ruin will be out February 1, but we have already been able to write about this album several times. Twilight Fields are from Northern Canada, and I absolutely love their sound. They are already slotted as a favorite discovery of 2019.  Lazarus is a popular subject of songs and literature, but I always love a distinct take. The band just released another track from the album - their cover of the Bruce Cockburn classic Lovers in a Dangerous Time, and that is the song featured in the video playlist.

Moist is the solo moniker of Swedish artist David Elfstrom Lilja. The new album, Lavine - which was released at the end of November - features vocalist Maria Marcus on ten tracks (include this lovely song). This is electronic pop music of the highest caliber.

From Bristol U.K., we have out first listen to The Heist by Ruzz Guitar's Blues Revue. This instrumental track features the guitar of Ruzz Guitar himself. This is electrifying blues show band music. Ruzz Guitar is endorsed by Gretsch.

Next up, we have a track by New York based blues/rock singer songwriter Shane Guerrette which came to us back over the summer - but took awhile to pop up in the shuffle. I'm glad it did. This good stuff., the self-titled debut EP was released in September. Really good stuff.


"Nothing" by Pete Berwick

I am really digging Island - which is due out tomorrow!  Pete Berwick has a long career making rocking roots-based music. This is a great song, and a great sound.


"Girls on the Run" by Mark Bryson

We close with Mark Bryson with another track from his Riot on Sunset album.  This song is a bit like Thelma and Louise meets Butch Cassidy and the Sundance Kid. This song features a character that shares the name with my radio partner. Mark Bryson is a cousin to music lover and house concert promoter Van Delisle - who I first met through Sue. Coincidence? Probably. But a good story nonetheless. Sue is a charmer, but as far as I know she has never robbed a bank.