I am kind of short on time today, so let's just jump headlong into the Featured Friday shuffle.

I think I'm pretty much done explaining what each days shuffle means so if you have questions, ask. 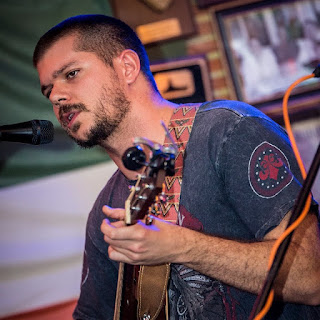 "My Trembling Guitar" by BlackieBlueBird

We start with a first listen to a dream pop duo from Denmark and debut album Ghost River which came out in November. This one blew me away this morning.  I look forward to hearing and featuring more.


Next up, some bluesy gospel music from the Reigning Queen of Beale Street Barbara Blue from her album Fishin' in Dirty H2O.  This one is sure to you on your feet and singing along.


"Today Won't Be Easy" by The Nouveaux Honkies

Next up, we have the penultimate track for us to feature from the excellent Loud in Here album by Florida/Knoxville based duo The Nouveaux Honkies.  This is a great song from a favorite album of 2018.

I am not the earliest fan of Jason Isbell by any stretch, but I was lucky enough to see him and the 400 Unit in the parking lot of the old location of Grimey's on Record Store Day several years back with a couple of dozen other fans.  This is from the highly praised Live at the Ryman album which came out last year. This was included on my friend Ronnie's annual mix CD he sends out to friends. Ronnie was actually the person who introduced me to Jason Isbell years ago on a earlier mix CD.  Ronnie was also the music critic for my high school newspaper when I was a sophomore and just getting into music.

2017 Artist of the Year Rayvon Pettis is back in the shuffle with another from his Dying Light album. Rayvon is a force of nature and a kind soul. I understand that his father Pierce Pettis is releasing a new album soon.


"You Don't Know" by Steve Conn

Next up, we have our first listen to Flesh and Bone - the forthcoming new album from legendary Nashville (by way of Louisianan) artist Steve Conn.  Among Conn's many accomplishments and credits, Conn was the founding musical director of the NPR series eTown.  I just got this CD in the mail recently - so expect more information soon. It's a good one, though. Flesh and Bone is is due out February 15, and a CD Release show is scheduled for February 18 at Douglas Corner in Nashville.

Next up, we have our first listen to Songs from the Deluge by Seattle based alt-country band Western Centuries. I really loved this first listen, and I expect to be writing more soon.

Next, we have another track from Ted Russell Kamp's forthcoming album Walkin' Shoes.  I can already tell this will be one of my favorite albums of 2019.  It is due out March 15 in the US. Kamp is based in Los Angeles.

And we close with one from Earie winning Nathan Bell from one of his two 2018 albums Loves Bones and Stars, Love's Bones and Stars. One of my favorite songwriters - word on the street is that Bell may just have two more albums on tap for 2019.  Cannot wait!