So, I got sidetracked yesterday and never finished my shuffle for Trending Tuesday.  I have to be quick, but since I already created the video playlist and deleted the songs from my phone, I wanted to go ahead and tell you what I listened to. 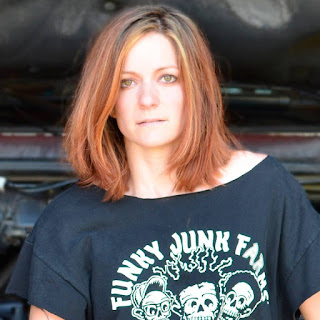 Another track from Still Tryin' to Believe by Peter Rogan. The album is due out March 1 and features guests including Will Kimbrough and Phil Madeira. Still could not find a video to show you, but hopefully once the album comes out, there will be some.


"Me Before You" by Renee Wahl and the Sworn Secrets

Next up, we have our first listen to Cut to the Bone by E2TG favorite Renee Wahl and The Sworn Secrets. The album is due out March 15. Renee Wahl is one of my favorite people in Nashville and this album finds her and her band at the top of their game.

More goodness from Rhythm of the Rain by Amelia White.  The album is out now in the US.  Her official release show is coming up February 7 at Dee's with Sally Jaye and Will Kimbrough as guests.  As always, Amelia will be backed by her ever-changing but always spectacular Blue Souvenirs.

Next up, another from from U.N. Article 14 by politically charged California punk band American High.

Next - another track from Two Sides to This Town by singer-songwriter Bobbo Byrnes.


"When I Get Paid" by Cliff Bennett

Next up, we have a song from 1960's British rock and soul artist Cliff Bennett (Cliff Bennett and the Rebel Rousers).  This is from the tongue-in-cheek Brexit themed compilation Gonna Make It Alone - which features songs with titles that seem like they might be about Brexit - but weren't.

Next up, a first listen to some new music from Low Roller - which features New York artist Ron Muga - who we featured some time back. Ron sent me this music back in October - sorry it took so long to pop up.  It's great stuff.


"Down Under Girl" by Mark Mathews

We we close this delayed shuffle with a track from Fizzy Beasts by UK singer-songwriter Mark Mathews. The album is not due out until April, but it sounds great, and I can't wait to hear and post more about it.