In case you missed it, we premiered a new song and music video this morning from Nashville band Ghost Town Remedy.  It's a fun video and a great song.  Check it out  HERE.

Anyway, it's good to be back. I was under the weather on Friday.  It's time for a Music City Monday Shuffle.  These are all artists who are or have been associated with Nashville. 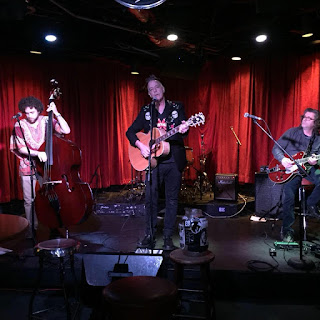 Anyway, we have a good one, so let's get started!

We start things off with one of my favorite songs from Nashville by way of New York singer-songwriter Stuffy Shmitt.  Stuffy is one the best songwriters I know. This epic seven plus minute song is moving and trippy and everything a great song needs to be.

Bill Lloyd returns to the shuffle - this time, we have a cut from his latest album Working the Long Game. When it comes to pop songwriting, Bill Lloyd is among the best.  As I have said before, I have been following his music for over 30 years now, and he continues to get better and better.


"Rain on the Streets of Berlin" by Fats Kaplin

One of the amazing things about being a music fan, living in Nashville is the abundance of incredible talented musicians based here in town. Fats Kaplin is among the best of those. A multi-instrumentalist - Fats Kaplin - when he isn't making his own music - is backing the biggest names in music. Most recently that has been John Prine.  This is a track from Fats' second solo album Fats Kaplin's World of Wonder - Downunder.

Cloverbottom were not only Nashville's first punk band (according to the Reverend Keith Gordon), they were also one of Nashville's first original rock bands.  The original line-up only recorded one 3 song EP, but they had a huge impact on Nashville music scene of the 1980s. This is from the essential compilation of Nashville's '80s rock music - Return to Elliston Square: 1979-1989.


"The Next Wind" by Daryl Dasher

Daryl Dasher is a Nashville songwriter - who traces his spiritual and musical roots to the Outlaw movement of the 1970s.  The hallmarks of the Nashville Outlaws were their commitment to great songwriting and their rebellion from the restraints of the Music Row Machine.  Willie, Waylon, and Kris were the standard bearers of the movement, but the Outlaws depth and reach stretches in a not always linear path that includes Townes Van Zant, David Olney, Steve Earle, Rodney Crowell, John Hiatt - right to some of my favorite writers today - like Daryl Dasher.

We have a twofer from Cloverbottom - this is from the release show for the aforementioned Return to Elliston Square compilation that took place at Exit/In in 2008.  Cloverbottom and other Nashville bands reunited for this show which was recorded and released by Spat Records!


"Stuck in Your Shadows" by Year of October

Long-time E2TG favorites, Year of October return to the shuffle with a track from their most recent album 2017's Trouble Comes.  With powerful guitar from Josh Sullivan and vocals by Phlecia Sullivan - it has been amazing to see  this band grow with each album.

And we close things out with a stand out track from Lifers,  the most recent album by 2015 E2TG Artist of the Year - Jon Latham.  The song is for those of us whose not so ideal younger years were made bearable by rock and roll music.  Word on the street is that Jon Latham is slowing preparing for his next album, and I hear it may be angrier in tone than his first two. Jon and his band do not play together very often, but if you ever get the chance to see them - don't miss out. It's sure to be one of the purest and funnest rock and roll shows you've ever seen.