The Magnolia Roads American Roots Hoedown IV is just around the bend!  Make your plans to attend Friday April 26 and Saturday April 27 at The 5 Spot in East Nashville.  The fabulous Lady Couch will be closing out the whole she-bang on Saturday!  Here is a video of Allen Thompson and Mike Ford of Lady Couch.


Now, we have come to the last Shuffle for this week. I am off work tomorrow for Good Friday.

You know, I may need to rename my Wild Wednesday shuffle - because to be honest our regular shuffles have been pretty wild and pretty awesome. Thanks go out to the artists and publicists who continue to send me great and diverse new (and reissued) (and new to me) music. 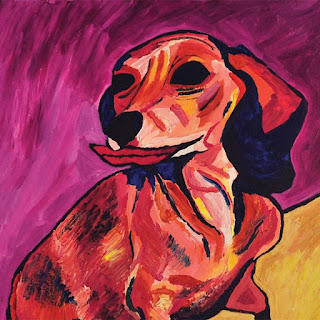 We start things off with our first listen to the forthcoming Berths album (due June 7).  The first single, "Rose" was just recently released and that is the song you will find in the video playlist. Slowness is a collective of New York City and San Francisco musicians - whose music falls into the shoegaze, slowcore, dream pop, and space rock genres.  Nice first listen. Can't wait to hear more.

Next up, we have another track from the fabulous Code Blue release by the Chicago-based one woman army who records as I Ya Toyah.  Wonderful electronic based music with great lyrics and captivating music.

Next up, we have the one and only Ty Segall with  live acoustic version of his song about his dog, Fanny.  This was released on vinyl last November with proceeds benefiting animal rescue organizations.  Here is a link to get a copy of the vinyl release with original art by Ty Segall via Aagoo Records.  In the video playlist, a 2017 band performance of the same song from Conan.

"Never is Forever" by Rat Fancy

Next up, we have another cut from the forthcoming Stay Cool from L.A. band Rat Fancy.  The album is due out in June on HHBTM records. Their music recalls nineties nostalgia with youthful energy (translation it is a hell of a lot of fun).  We have a video from an earlier song by this great band.

Shifting gears, we have a beautiful and powerful song from Asheville, North Carolina based singer-songwriter Jane Kramer from her Valley of the Bones album.

You may recall, we premiered "Midnight Rendezvous" from Nashville singer-songwriter Josh Gray's then forthcoming album Songs of the Highway.  Well, the album is out now, and today we have another track from the album. Josh Gray is one of my favorite songwriters around, and this new album is incredible.  His album release show is set for May 8 at The Groove in East Nashville. Another E2TG favorite Jason Erie is opening.  Gray and Erie are currently on tour together.

We close the shuffle and the week with two tracks in a row from the New York City based experimental electronic music collective known as Pas Musique from their album The Phoenix.