Today another reminder about the Magnolia Roads American Roots Hoedown IV - happening next Friday and Saturday April 26 and 27 at The 5 Spot.  If you are on Facebook, go head and mark that you are GOING. Here's the Event Page. 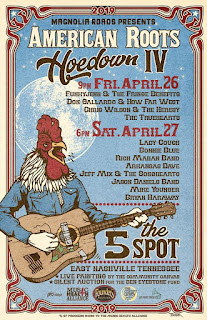 Now, it is Wednesday and time to dive right into the Wild Wednesday Shuffle.  I believe this one lives up to the name. New songs, classic songs, and who knows maybe some new classics.


"A Different View" by brim liski

We start things off with a first listen from the recently released Duels EP from Colorado experimental band Brim Liski - which featured Cacheflower (Justin Gitlin - a multi-verse digital artist and Ryan Policky - who is vocalist of the prog-gazer band A Shortline Dream (who we have featured). This combo formed in 2008, and the Duels EP is their first release since 2012. Decidedly different, ultra-modern, and really cool.


"Unstable and Unsound" by Shadow 15

Next up, we have a track from legendary Nashville punk/post-punk band Shadow 15. This comes from their compilation Far Away. We have been featuring this album off and on for the last couple of years, and I have loved catching back up with this great music from my younger days.

While we have been celebrating I Walked In Them Shoes - the incredible new album by Adam Carroll, it is worthwhile to step and visit/revisit some of his body of work. This is a track from Far Away Blues (by the way, I did notice the coincidental similarity of this album title to the Shadow 15 compilation title.

Next up, we have the title track from David Bowie's 1975 ninth studio album. The song features the line, "A heard the news today, oh boy!" from The Beatles, "A Day in the Life". John Lennon - who wrote that line appears on the album and is listed as a co-writer for the song, "Fame".

Los Angeles band X, are up next with a track from their third studio album, Under the Big Black Sun. The original line-up of this long-running band recently celebrated their 40th year as a band. This album will turn 37 years old in July.

Next, we have Georgia band Drivn' N Cryin with a track from their fourth studio album Fly Me Courageous. The band will be releasing their new album June 21. Live the Love Beautiful was recorded here in Nashville and produced by Aaron Lee Tasjan.


"You Should Go Catatonic" by Batkhi Dahn

Next up, we have a track from Hogwash by Connecticut band, Batkhi Dahn. This is the primary musical creative outlet for Hayden Nork. Hogwash also features Hayden's brother Evan and friend Luke Slomba (all were members of E2TG Band of the Year The Foresters and also Discount Ravioli).  In the video playlist, we have the video for a newer song which is about my friend Giulia (or more specifically about her house).


"That's the Way" by Matt Campbell

Next up, we have some great honky tonk country music from Nashville's own Matt Campbell - from his album The Man With Everything. A wonderful song.


"Bluer Than You" by Joyann Parker

Some hard soulful blues from Minneapolis-based Joyann Parker from her album Hard to Love - which we featured heavily last year.

And we close things out with another listen to the forth coming Seen Enough Leavers.  On this album, Meghan Hayes is joined by some of Nashville's best players - including Audley Freed on guitar. It is Hayes' songs that are the star of this album - which are brought to life by the great music and vocals.