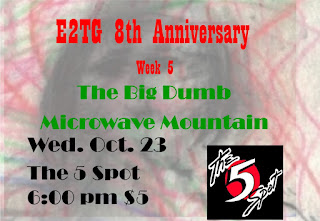 Limping into the weekend....

Been working on my plan for wrapping up 2019 on E2TG and gearing up for the launch of E2TG v3.0 coming early, early 2020 (with MAYBE some features rolling out before then... maybe).

"Simply the Best" by Hafdis Huld

We start out with Icelandic artist Hafdis Huld with a track from her covers album Variations. This is a song written by Mike Chapman and Holly Knight. It was originally recorded by Bonnie Tyler on her 1988 Hide Your Heart album - as "The Best".  It was covered by Tina Turner in 1989. As she does on this album, Huld makes the song her own.

We have yet another track from Street Serenade by Anders Dahlberg.  Another strong track from a wonderful album.


"Out on the Balcony" by Joy Cleaner

More goodies from New Jersey power pop band Joy Cleaner off their forthcoming album You're So Jaded.  The album is due out November 8, and I am really enjoying it.


"Stained Glass Windows" by The Pull of Autumn

An excellent idea via a wonderful song by E2TG Band of the Year, Bark from their latest album Terminal Everything.  Facebook reminded me that I met Tim and Susan for the first time - six years ago this week.  They are two of my favorite human beings as well as a favorite band of both me and my daughter - who has seen them several times.

Okay - this is why I love the random shuffle.  These two songs are from Redemption 10 (a live rerecording of singer-songwriter Libby Koch's debut album Redemption). At the end of "I Still Miss Someone" somebody in the audience yells out "Encore!" and then the shuffle brings up another song from the album.  I got to see Libby Koch at The Broken Jukebox Media Americana showcase during AMA Fest.  She did a song swap with Chuck Hawthorne and Terry Klein.  I am digging this album.


"My Baby's Comin' Back" by The Luckies (feat. Eddy Blake)

We have another track from East of Eden by Canadian band The Luckies.  This track features the vocals of rockabilly great Eddy Blake. A wonderful addition to our playlist.

Next up, we have another track from Tell the Truth and Shame the Devil by Nashville based singer-songwriter Rod Picott. Picott is not only a singer-songwriter, but he is a poet and writer of prose as well.  He is at heart a story teller, and there is an honesty to his songs and his words.


"When You Get Here" by Tony Logue

We have had several tracks from Tony Logues Live at Red Barn Radio album come up this week. This is a lovely and powerful song about loss and faith and hope.


"Little Black Heart" by Jeff Mix and the Songhearts

Next up, another from Lost Vegas Hiway. And a reminder that Lost Vegas Hiway is both an album and a film - which can be found on Amazon Prime Video. Jeff Mix is now a Nashville resident.

We close with another track from Too Many Ghosts by experimental singer-songwriter Woody Aplanalp and his project Bonsai Universe. Delightfully weird, I have been enjoying this album. Much more to come. A great ending for the shuffle and the week.