I hope to see everyone tomorrow night at The 5 Spot.  It is going to be a great show - once again, some of Nashville's finest will be backing out our two featured artists.  It's an early show, so come after work and we will have you home or to your next show by nine! 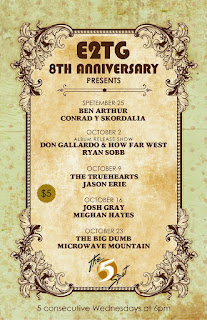 Pushing forward!  I have some first listens in the shuffle today!

"Sex Riot" by Tate and Silas

To start things off, we have our first listen to Third: Nothing to Lose by the Connecticut duo (or is it trio) Tate and Silas.  This one came to me via an e-mail inquiry, and I have been following their antics on Instagram since then.  I dig the vibe they have going on, and I look forward to writing more about them.


"No Hay Otro (There's No Other)" by Bill Bloomer

The parenthetical title is the English translation of the Spanish title of this song from Bounty by E2TG favorite Bill Bloomer. As I have mentioned, Bloomer is an American ex pat living in France currently.  He has spent time in virtually every corner of the globe - including time at Buddhist temple in Thailand.  My favorite part of his story is that he met Hunter S. Thompson as a youth while wrestling a nine month old lion at a "Wild West Show".  Bounty is a wonderful album.


"In A Kiss" by Helene Cronin

Next up, we have another track from Old Ghosts and Lost Causes by Helene Cronin.  The album was produced by Matt King and features musical support from the likes of (Cousin) Kenny Vaughan and Byron House. Wonderful songs on a finely produced and well played album - couldn't ask for more.

Texas songwriter Susan Gibson is up next with a track from her seventh studio album - The Hard Stuff.  Gibson wrote the title track to the Dixie Chicks Wide Open Spaces album.  Really enjoying this albums, and  the songs are fantastic.


"The World Tilts Sideways" by Dizraeli

We continue our march through The Unmaster from UK hip hop artist Dizraeli.  This is a brief - almost spoken word track.  This is definitely an album you want to take in as a whole. Dizraeli creates and mood and a vibe and then makes it work for him.

Another Texas songwriter.... Randy Lewis Brown is one of my favorite "discoveries" of this year.  His new album Red Crow quickly found a place among my favorites of the year.  It is the song - and the voice and the music.  This song features a evocative cello.


"Hiways Lonely Side" by Jeff Mix and the Songhearts

Next up, we have another track from Lost Vegas Hiway by former Las Vegas (and now Nashville) singer-songwriter.  One of my prime takeaways from this past springs Magnolia Roads American Roots Hoedown.  Lost Vegas Hiway is a bit of concept album with an accompanying film.


"The Drunk Firefly" by Bonsai Universe

Next up, we have a first listen - and it is a rather interesting instrumental from Too Many Ghosts by Bonsai Universe.  Bonsai Universe is a project of guitarist Woody Aplanalp.  Aplanalp has toured with a diverse list of artists including Nels Cline, Bobby Womack and Lauryn Hill.  More to come from this great album.


"What Can I Do" by Magnapop

Next, we have another track from The Circle is Round by pioneering, Atlanta based indie band Magnapop.  It is their sixth album, and comes nearly a decade after their previous album.  It is their debut on Athen Georgia based HHBDTM record.s.


"Do the Damn Thing" by Tino Drima

Tino Drima is a San Franscisco band,  They will be releasing their new EP Suitin' Up on Friday. This is our first listen to the five song release which finds the psyche rock band stripping down their sound. Digging what I am hearing so far.  Can't wait to hear more.